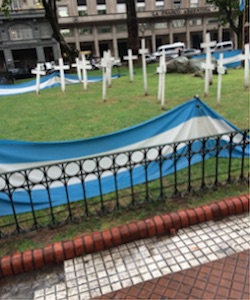 Las Manifestaciones (The Manifestations):
Wisps of smoke fill a corner of the street. Ba boom. Ba boom. The sound of drums and chanting. Ba boom. Ba Boom. Craaccck! A friend hides behind me at the abrupt transformation of noise: firecrackers. Argentines live, breathe, and are composed of the fire to crusade for their rights. From José San Martin defying orders and winning Argentine independence, to the youngest children expressing deep opinions about justice, Argentine culture and history is full of fight. Posters fill the hallways of the University of Buenos Aires, and the students constantly interrupt classes to speak out against government policies that at times negatively affect their education, or the lives of their loved ones. The history of the struggle for justice permeates the city through daily marches, as well as through the presence of the Edificio Libertador: Ministerio de Defensa (Liberator Building: Ministry of Defense), President Juan Peron’s statue, and the street Azucena Villaflor.

What does it mean for the statue of the man who expanded public welfare programs; the physical reminder of the Military Junta (which captured, tortured, and killed millions during the dictatorship); and a symbolic representation of one of the dictatorship's victims and founders of Las Madres de La Plaza De Mayo to be within feet of one another? Argentina is like something I’ve never witnessed before, yet so familiar. And I begin to wonder, what does it mean to be heard, but ignored?
The crisp cool air of a December night slices the silence; light rain drops fall on the lifeless bodies of my fellow protesters as the Christmas Tree Lighting Ceremony crowd encloses around us in Dahlgren Quad. But unlike Michael Brown, we rise and begin to scream: “No justice, no tree! No justice, no tree! We can’t breathe!” Unfortunately, protests like these become a nationwide normality as more killings continue to occur with zero consequences. The heaviness of it all weighs on my mind, as I wonder why people still don’t get it. I want to scream: “Can’t you see people are dying!” But I guess that’s what it’s like to be heard, but ignored.

Representación Visual (Visual Representation):
This photo was taken 15 years ago. I am the smiling child with a mouth covered in ice cream clutching the gray-haired woman with the thin-framed gigantic glasses. I can still smell her and hear her rattling yet calm, sweet voice: Ma, my grandma. She was 90 years old, and I was 5 years old. She was one of my greatest supporters who I’d happily hide behind for protection, and who I cried for when she’d leave to visit her home in the country. She’s now snatched away by death, time, and the faultiness of my memory, but I do remember her. She lived a long life of 97 years, and I’m lucky I could say goodbye. What a juxtaposition to the pictures and videos of fallen people of color filling my timeline, they too snatched by death, but too soon. The images are inescapable; even in “Lemonade” I am confronted with the broken and pained eyes of Michael Brown’s mother as she holds her murdered son’s graduation photo. There are videos and witnesses. There are memories and truths about him, yet justice is lost. He was only a kid! What does it mean to be seen, but erased?

The Plaza de Mayo: a circular plaza reminding me slightly of Dupont Circle, but a tad less chaotic, sits facing La Casa Rosada. Every Thursday for the last 40 years, mothers with white scarves tied around their heads, now weighed down by age, hold pictures of their children murdered by the military junta and signs asking for answers, in addition to the location of their grandchildren who were killed or given to military families. These are Las Madres de La Plaza De Mayo who hold onto the history and memories of the lost. The government watched them for years denying the victims’ existence, disappearances, and deaths. On Wednesday, a newer fight marched: Ni Una Menos. White crosses, signs, and drawn tombs calling to memory the raped and murdered women who died at the hands of men. Both groups call for justice, yet some mothers still await answers, and these women continue to see their own perish.

What are memories, and how do the shape us? What power do they hold? Do they really stop us from repeating the past? What does it mean when they’re taken away? How do we continue to fight when weary? What does it mean to be heard and ignored? To be seen and erased?