Daily life in Rabat, Morocco, is full of references to the nation’s Muslim majority. For instance, in Arabic, we greet each other with as-salaamu alaykum, which functions as a way to say hello but literally means “peace be upon you.” Notably, it’s a religious phrase used among Muslims. Moroccans, mainly Muslim Moroccans as far as I can tell, also say inshallah, which translates to “if God wills it.” The phrase can be used either in a genuine way when wishing for a friend to have a safe journey, or in a sarcastic way, for example, when expressing a goal of waking up early to go for a run. It’s a great phrase that does not really have an English equivalent that is quite as multipurpose.

The call to prayer, too, is another example of how religion plays a role in daily life here. Five times a day, all of the mosques recite the call to prayer, part of which translates to “God is the greatest,” over a loudspeaker. Usually, the mosques start the call at slightly different times, maybe a minute apart from each other, so if you’re out and about when the call is played, you’ll hear a beautiful, slightly messy version of it. The first few times I heard it, it definitely caught me off guard, but now it’s a familiar, almost comforting sound.

Also, businesses sometimes will have signs indicating their regular business hours as well as their business hours during Ramadan, which is probably very helpful information. While I have not experienced life in this country during that time, I’ve heard that Ramadan completely changes Moroccan society’s schedule.

Sometimes Morocco’s religious homogeneity seems like it can be a helpful way for Moroccans to find common ground. For instance, in my mythology class at the Mohammed V University, my professor is able to liken myths to Quranic stories, which presumably the entire class understands. Also, my host mom is a Quran teacher for children. From our conversations, I know that this experience helps her find purpose and feel connected to the community. I also imagine that it is a job that resonates with people. When she explains what she does, I feel as though people probably connect with and respect her profession, because of the religious identity of the country.

I’d be curious to learn more about the experiences of religious minorities here. An American friend of mine went to a synagogue in Rabat for a research paper she was working on, and she mentioned that there were only about 15 men at the service she attended. Based on the conversations my friend had, it seems like the Jewish community of Rabat is small but close-knit. I also attended a Catholic Mass here, and the Catholic community seems much larger than the Jewish community. The day I went, there were about 400 people, many of whom were sub-Saharan immigrants. I imagine that these communities become close in part out of a need to connect with people from the same religious backgrounds. Perhaps they represent tastes of home and familiarity in a new environment, too. In any case, it appears that Morocco is a country that embraces religion—Islam, of course, but also Judaism and Christianity, and potentially other religions too, although I can’t speak to them specifically. Beyond embracing religion, Morocco also seems to actively celebrate it on a daily basis. 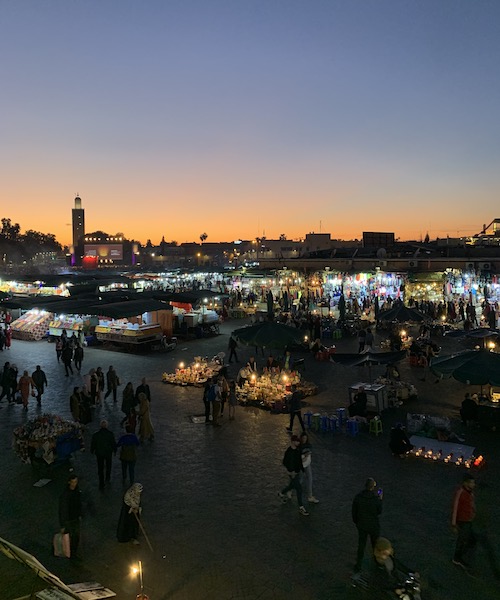