Living in Colonialism’s Shadow: What It Means to Be a Bule in Indonesia 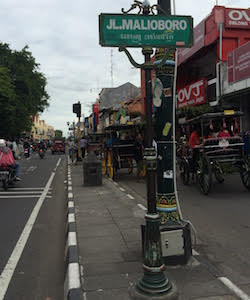 Last Sunday morning, my host brother and I set to Malioboro Street, or, in the Indonesian language, Jalan Malioboro, one of the main tourist attractions in Yogyakarta, Indonesia. Although we had both been there too many times to count, it is a favorite place of ours to people watch and shop, as the contents of the many shops lining the road are constantly changing—you never know what you might find on Malioboro.


Jalan Malioboro is not only known as one of the main shopping hubs in Yogya, but also as a one of the most important historical centers of the city. Malioboro is home to Pasar Bringharjo, the oldest traditional market in Yogya. Many of Malioboro’s buildings are from the Dutch Colonial era—ranging from the small shops to the post office and Indonesian National Bank. Horse drawn carriages, or andong, line the street eager for tourists to come and catch a ride. Behind Pasar Bringharjo is Fort Vredeburg, a looming Dutch colonial fortress claimed to be haunted by angry Dutch soldiers and Indonesian victims alike. But, even beyond Malioboro, which has embraced its colonial past to create a sort of tourism time capsule, remnants of the Dutch colonial era are hard to avoid in Indonesia, and it’s easy to understand why. Indonesia gained its independence in 1945 and celebrated its seventy-first birthday last month. Relatively speaking, Indonesia is still a very young country—many Indonesians still alive today can remember the colonial era and the war for independence.

As I have been in Yogya since June interning at the Indonesian Consortium for Religious Studies, I think I have been made more aware of these post-colonial intricacies and their implications due to the work that I have been doing. My supervisor and I recently finished researching the effects that colonialism (and, more widely, Orientalism—if you haven’t read Edward Said’s book by the same name, I highly recommend it) have had on Indonesian political society and religious expression in the political sphere. Our findings led us to one general conclusion: Indonesians have developed what we described as a “cultural inferiority complex” in which it is either consciously or subconsciously believed that Western culture is superior to Indonesian culture. We argue that this complex has developed as a result of centuries of Dutch colonialism and is also a part of a larger global phenomenon due to Orientalist thought and scholarship.

Our research was not only interesting to me in the academic realm, but also on a personal level. Looking in-depth at Indonesia’s complex and rich history has helped me to better understand how I am viewed as a Western foreigner, or bule, in Indonesia, and why I am viewed that way. In my experience, colonialism and the inferiority complex have created a dynamic in which bule are treated like celebrities who automatically hold a higher social status than Indonesians, regardless of who they are. Even after living roughly a year and a half in Indonesia, the whole situation still makes me very uncomfortable. Complete strangers come up and ask to take photos with me—I’ve actually had lines form like I was a princess at Disneyland. I am constantly told how “beautiful” I am by strangers as well. Although this might seem like a compliment, the reasons why I am considered beautiful play right into the colonial mindset and the historical Western standards of beauty: my white skin, pointed or “stand up” nose, and blonde (I’m actually a brunette) hair are what makes me “beautiful” in Indonesia.

For me, understanding this power dynamic centuries in the making has been critical in helping me to become a more responsible bule during my time here. I now try to keep a constant awareness of this dynamic and carefully choose my words and actions in situations where this issue becomes relevant. Although this process has been uncomfortable at times, I feel that understanding the way I am viewed in Indonesian society has also given me important insight into Indonesian culture, and for that I’m grateful.