On March 7 this spring, bright and early at 7 a.m. in the morning, a group of nine strangers, two friends, and I piled in two vans, bags and pillows in tow, and began the drive up to Boston, Massachusetts, where we would be visiting a number of different organizations dealing in some way with the issue of mental health. So began the first Alternative Breaks Program (ABP, and formerly known as Alternative Spring Breaks) I went on. Based on service, immersion, and reflection, ABP sends groups of 12 to 18 Georgetown students all over the United States every year to spend their spring break learning about various social justice issues; aside from the issue of mental health, ABP has also explored LGBTQ issues, homelessness, rural poverty, food production, and so on.

I have been fortunate enough that I have never had to deal with any mental health problems and, as far as I know, neither have my friends or my family (though I realized after the trip that the reason for that could be that such problems are often hidden away). But serving as an ESCAPE leader for the past academic year, I feel like my eyes were being opened for the first time to the prevalence of such issues on campus as mental health came up time and again in the intimacy of small group reflections. It has also recently come to the fore on college campuses with incidents like the unfortunate suicide of University of Pennsylvania student Madison Holleran whose story is beautifully covered here.

It was on ABP that I began to see just how convoluted the issue of mental health and illness is. The statistics are horrifying; for instance, the World Health Organization predicts that people with severe mental disorders die 10 to 25 years younger than the general population. Research has also found that people on psychiatric medication are generally under-diagnosed for physical ailments , due to the negative stigma associated with mental illness. Staff workers at Advocates, an organisation we visited in Boston, told us of a man who was having chest pains and went to the emergency room three times, but was refused each time and told he was having hallucinations. When he was finally admitted, he was admitted not to the emergency room but to the psychiatric ward. As he was in a gurney in the elevator on the way to the ward, he died of a heart attack.

That story and similar negative experiences we heard during our visits to Advocates, Prakash Ellenhorn, the Western Mass Recovery Learning Community, and the William B. Rice Eventide Home, among others, affected us deeply and forced us to grapple with the implications of such stories and what we could ourselves do for the issue of mental health at Georgetown. On the trip, we also had the opportunity to meet Robert Whitaker, journalist, author of controversial books Mad in America and Anatomy of an Epidemic, and founder of Mad in America, an online resource dedicated to the critical re-thinking of the mental healthcare system.

Throughout the journey, I appreciated going through the learning process with my ABP group. Community was built in both the happy moments of singalongs, laughter, and fun in the van as well as in the more serious moments as we reflected on the things we had learnt, discussed important questions like the efficacy of psychiatric medication and the role of agency in mental healthcare, and talked about how to put our newly-gained knowledge to use at Georgetown and what it means practically to put the Jesuit value of care for the whole person into action. Three months on, learning about mental health is a journey that we as a group and individually are still on.

The transformative experience ABP had been for me, both in terms of forging community as well as learning about the complexities of mental health, inspired me to apply to lead my own ABP trip next year about a topic I am passionate about, deafness and disability. The trip aims to look at deafness as a social justice issue, and in particular to introduce students to a non-pathological framework of understanding deafness as a culture, even an ethnicity, rather than an impairment. I recently learnt that my trip has been accepted and that I'll be co-leading the trip with a friend! I hope that the ABP trip will be as powerful an experience for its participants as mine was for me. 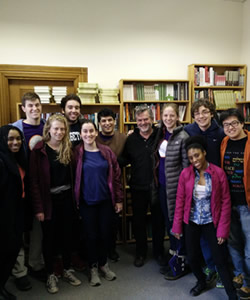