No Honor in Crime: Jordanian Women Change the Conversation about Honor Killings

In Jordan each year, somewhere between 15 and 20 women are murdered in the name of honor. The reasons for these honor killings vary: sometimes the woman committed adultery, or married the wrong man, or had sex before marriage. Sometimes, she is killed because she was raped.

But Jordan’s activist women who are involved in the “No Honor in Crime” movement are speaking out against honor killings. They are not only calling for reforms in legal punishments, but also for changes in the culture that makes these honor killings possible. In an article on the Jordanian site 7iber, the author argues that focusing just on the statistics of honor killings is misleading; instead, Jordanians need to examine the context in which these crimes occur in the first place.

Honor killings are generally considered to be a Muslim phenomenon, and although Muslims commit the majority of honor crimes in Jordan, Christians commit them as well. The concept of honor was an integral part of Arab society long before the spread of Islam, and today it seems to permeate the culture to such a degree that it regulates every interaction between men and women, constantly drawing the line between what is appropriate and what is forbidden.

Any behavior that might suggest a woman is unchaste threatens her honor and necessitates her separation from men. A woman’s honor is also her family’s honor; if she is suspected of transgressing sexual mores, the problem might be serious enough for her family to feel justified in killing her.

Although the punishments associated with these murders have historically been rather lenient, there has been some legal reform in recent years. For example, men who performed honor killings used to seek protection under a clause that protected those who committed crimes in “a fit of fury.” Where these men would have previously served only two years in prison, now they might serve seven.

In any case, research shows that these killings are far from uncontrollable fits of fury; rather, they are collectively calculated attacks in which multiple family members are involved, including mothers. Because the law is more lenient towards minors, the family will often have a younger brother commit the murder, whose sentence would only be about three to six months. Because they usually have nowhere else to go, women will sometimes commit themselves to prison in order to escape murder. About 13 women are currently imprisoned in Jordan out of fear of their families.

Like every taboo, the problem continues because of fear to challenge it. Women don’t speak out against these crimes because they’re afraid of shaming their families by having their names appear in the media. But the “No Honor in Crime” movement challenges this honor culture by creating a space where the very concept of honor can be critiqued. The mainstream discourse on honor killing, as far as I can tell, considers honor killings to be a legitimate category separate from other murders. When these crimes are condemned, it is usually because the murdered woman was innocent, and not because there is something inherently wrong with the concept of honor killing.

“No Honor in Crime” seeks to push the public discourse in a direction where the very notion of honor killing is unjustified. “No Honor in Crime is a movement for the elicitation of justice,” says the main page on their website. “We believe that the deeds must be called by their names: a crime is a crime and a murder is a murder of a human being. We believe that these actions need to be held accountable for what they are: crime must be punished as crime and murder as murder. No Honor in Crime is a movement that seeks the truth, because the truth is the most honorable human demand.”*

From where I stand, the social system in Jordan is meant to protect both women and their honor. A culture in which men and women avoid interaction might be meant to eliminate the subject of sex from everyone’s minds, but it ironically forces everyone to focus on it. Instead of making a woman’s body invisible, Jordan’s honor system makes a woman’s body (and what she does or doesn’t do with it) the most important thing about her. This makes her more vulnerable, because when you take the system’s logic to its ultimate conclusion, it enables violence in the name of “honor.” And this isn’t to say that America is any better; we have our own cultural norms that enable and engender violence against women. But I applaud the women of “No Honor in Crime” for breaking taboos and challenging people to critically examine the ideas that give rise to these horrible offenses.

*Translated from Arabic; all mistakes in translation are my own. 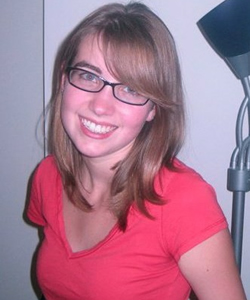 Morgan McDaniel graduated from Georgetown's School of Foreign in 2013 with a major in culture and politics. She participated in the Berkley Center's Junior Year Abroad Network while studying in Amman, Jordan during the fall semester of 2011.
comments powered by Disqus