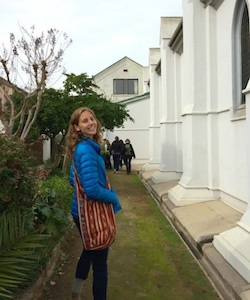 The soft lapping of the waves on the lake shore and the rustling of the bright, green leaves were the only sounds I could hear from my cabin porch. It had taken me two buses and a total of 20 hours to get here, but I had truly found a quiet, peaceful, and almost mystical escape from the bustling port city of Valparaiso.

This past weekend my two friends and I ventured to the southern part of Chile to stay on a Mapuche reserve in a small town called Icalma. Mapuche is the most recognized indigenous group in Chile. About 10 percent of the Chilean population is Mapuche, and half of them still live in the south, while the other half has migrated to larger cities. This indigenous group has a large presence in the country mostly due to the fact that they never fell under Inca control and successfully fought against Spanish colonization. Even walking around Valparaiso, Mapuche flags, music, and jewelry designs are very commonplace.

Even though Chile proudly presents this culture as an icon of the country’s identity, its treatment towards Mapuche communities is controversial. Many indigenous people face discrimination, are poor, and worry they are losing their culture. Government efforts to maintain their lifestyle, language, and traditions are few and far between. As an exchange student I have noticed this dearth of recognition. My limited exposure to the Mapuche population has come from my professor, who is indigenous. So in order to gain a better understanding of their lifestyle, traditions, and values, my friends and I decided to stay with a family on a Mapuche reserve for the weekend.

As we walked up to the house, our hosts Chella and Gastón, as well as their three children, greeted us and explained some of the history of the reserve. Currently 35 families live there, and they often celebrate traditional ceremonies, the most important one being the New Year, which occurs on the longest night of the year.

I could sense the important role the reserve plays in maintaining Mapuche traditions. However, over the course of the weekend I came to better understand the struggles they face in preserving their culture. The second evening there, Chella told us that they speak Mapudungun (their native language) in the house, but when we spoke with their children, they mentioned that they only know basic words. Yet that same day their daughter Rosaria showed us her schoolbooks, which teach not only the language, but also Mapuche stories, traditions, and values, such as the importance of respectfully listening to grandparents.

As she showed us the book, I noticed in the front cover that it had been created and published by the Chilean government in adherence to the state’s “responsibility to preserve Mapuche culture.” However, many indigenous people criticize the lack of government efforts to truly respect and revitalize this dwindling culture. The contrast between the government and local reserve’s endeavors to keep traditions alive brings up the question: What are the most effective ways to preserve local, indigenous culture?

This is a difficult question to answer, especially as society is becoming more modern and globalized. More than half of the Mapuche population has moved away from their land and chosen to live in large cities, mostly in Santiago. We met Gastón’s brother, who has lived in Santiago for 20 years. He would like to move back to Icalma but currently has to stay in the capital because it offers better work opportunities. More children are moving away from the region for college and not returning, making it increasingly challenging to maintain their culture.

Education is often an important place to start as a response to these difficulties. Just as Rosaria is learning Mapuche language and traditions, all Chilean children should learn about its culture, as well as the current discrimination facing this population. Towns and cities can put on more cultural events. With more exposure, hopefully discrimination towards Mapuche people and culture will decrease, and they will receive more respect and revive their traditions.

Preserving Mapuche society is important not only because it teaches about the past and promotes important societal values, but it is also a beautiful culture. The last night in Icalma I wandered down to the lake’s edge. I could hear soft, faint drumming and chanting surrounding a small red glow from a bonfire across the lake. It was a magical sensation demonstrating the beauty and enchantment of Mapuche culture that enriches diversity and life not only for its people but also its country.