Reconnecting with My Polish-American Identity 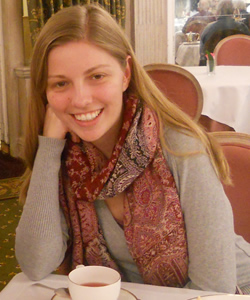 I stood on a gravel path between two perfectly straight rows of gravestones, hands shoved into my pockets as I tried to hide from the blustering wind. Despite the unseasonably cold weather, a number of visitors strolled about the cemetery. Flowers and candles adorned the majority of graves, testaments to friends and family who had recently come to pay their respects. I, too, had come to do the same. On this particular afternoon, my aunt, her mother, and my ten-year-old cousin accompanied me, weighed down by shopping bags full of flowers and candles of our own to put on the graves of our family members.

This visit to the northwestern town of Koszalin, Poland, was my first in three years. My mom had grown up on these streets before moving to the United States in her early twenties, and almost her entire family still lives here. From the outset of my study abroad experience, I knew that I wanted to take some time off from the London fog in order to see my relatives. My distance from home and my immediate family made it all the more refreshing to see my grandmother, aunt and uncle, and all the other people my mom had grown up around. I did not get to see my family much, but they welcomed me to Poland as though a literal ocean did not exist between us.

My grandmother and aunt thought it was especially important that I visit the grave of my grandfather, who had passed away since I last saw him three years ago. When we arrived at the cemetery, I watched as my cousin immediately set about arranging the flowers on our grandfather’s grave that had been blown askew by the unrelenting wind. An upbeat little chatterbox, she enthusiastically explained to me that at least one member of our family came to the graveyard every week to tend to the graves and to pray for the lost. I smiled, appreciative that she was so excited and willing to share this important and touching aspect of her culture. My immediate family certainly had not been to a cemetery for any reason other than a funeral in years.

And then, stronger than the roaring, gusty wind, it hit me—we used to do this.

Watching my cousin arrange flowers on my grandfather’s grave triggered a memory that I did even know I had kept. My mind flew back to a cold and rainy All Soul’s Day in suburban Connecticut, many years ago. I saw myself dutifully trudging through a cemetery hand in hand with my mother. I heard myself complaining because it was early, because the weather was awful, and because none of my friends had to do strange things like go to Polish mass outside on cold autumn days in creepy graveyards to honor the dead. I remembered my mom telling me that back in Poland on All Soul’s Day, she and the Polish Girl Scouts would go to the cemetery to put flowers on all the graves that did not have any. And that is exactly what we were doing—in the rain, in the middle of suburban Connecticut, I was placing flowers on strangers’ graves at the request of my mother and her deep sense of tradition. I could not have cared less and wanted nothing more than to go home.

We had not done any such thing in years, though, and, standing in front of my grandfather’s grave in Koszalin, I felt like some sort of bridge between my family’s Polish past and American present. I remembered not being able to go to sleepovers with my friends on Friday nights because I had to wake up early on Saturday mornings to go to Polish school. The day I figured out that most other kids only went to school five days a week rather than six stands out as a devastating moment in my young life. A lot had changed since those days, though. After my brother and I graduated from Polish school (eight long years!), my family gradually stopped speaking Polish at home. In that graveyard, I realized a truth that I had in fact been living for many years—my family, whose Polish heritage I was so proud of, had Americanized, had assimilated.

Part of me felt a sense of loss. Over the years, we had let go of traditions and an identity that I did not think I really wanted to let go. Standing next to my cousin in that cemetery felt at once foreign and familiar. I stood as both observer and participant in a foreign culture, unable to fully fulfill one role or the other. Was I just a tourist, or was I really one of them? Back in the United States, playing the role of “that Polish girl” contributed an important facet to my identity.

There in that cemetery, I am sure my family saw me as “Marzena’s American daughter.” I had never fully understood what being Polish-American meant to me until that moment. I sought to tread two identities and embrace them both. Maybe I would never totally fit in to either, but I realized that I did find some personal fulfillment in bringing them together. I knew that my grandfather would recognize the Polish in me. He’d laugh at the American, but he would appreciate it, too. Taking a Polish flower from my cousin with my American hands, I placed it on my grandfather’s grave said a prayer for my family in my Polish-American heart.