Reflections from a Constant Learner

The Doyle Global Dialogue (DGD) was an excellent and safe atmosphere to share my interpretations, experiences, and overall knowledge about the culture, politics, and society of my host and home countries. I must say that this initiative brought different students’ perspectives into one discussion platform, and from there, students integrated their theoretical knowledge with their real-life experiences of culture. Before starting the DGD, I thought of many experiences that I wanted to share with fellow DGD participants since I always reflect on differences between my Uzbek and host country’s cultures. The contribution of other DGD participants to the fruitful discussions was vital in terms of its impact on the formation of my cultural understanding. As I reflect on the past four months, I had a great opportunity to learn more about intercultural and interracial differences while exploring the experiences of DGD participants and my own.

When I first came to Qatar, it was my first time ever abroad, outside of my own culture and comfort zone, all while living alone with no family members in a different country with different cultural values, social norms, and language. I remember my initial impressions and reactions when I experienced a cultural shock that I could not reflect on at the time. Not only did I have to deal with the overwhelming cultural differences, but I also had to adapt to my university environment, which was totally different. When I was told that Education City (where Georgetown University in Qatar has its campus) had slightly different vibes compared to the rest of the country, I was confused by this remark. After some time, I realized that inside Education City—with six American universities—the atmosphere is slightly more liberal and open-minded. This space not only contains American culture, but it intersects diverse cultural values with those of Qatar. Education City creates unique opportunities for students to encounter various cultures and social backgrounds, enabling students to diversify their knowledge and widen their outlooks.

During our discussions with other DGD participants, I was surprised to find out that they experienced many of the same feelings. The topics that were raised during discussions were, for example, about respect toward people’s religious beliefs and cultural values. We talked about interesting occasions where we experienced differences or similarities among our cultures while establishing links with theories we learned. For example, I referenced the individualist and collectivist types of culture when I was explaining the common group-oriented mindset of Uzbek and Qatari people. Moreover, the participants shared important stories that highlighted the differences in actions that are based on cultural or religious values. The boundary between cultural values and religious norms is often blurred. For example, people with the same religion dress differently, act differently, and practice religion differently. This goes to show that our religious practices are not singularly shaped by religion itself but are also influenced by cultural factors. I noted that praying five times a day among Qatari people is common whereas the same practice is uncommon in majority-Muslim Uzbekistan. So, in our discussion, I related this to the cultural differences in religious practices and interpretations.

As we continued the program with designated themes for each month, I drew a comparison between cultural influence on politics in Uzbekistan and Qatar. It might be challenging to notice similarities between a self-claiming secular state and a sheikhdom; however, the way the leaders of both countries are idolized is analogous. In addition to connecting dots with cultural values, we also explored the influence of religion on how the politics of certain countries are run. For me, it was interesting to analyze other participants’ real-life experiences under Qatar’s sharia law. Another amazing point that was made during our discussions was about adjusting to the host country’s environment. We all shared how difficult it was at the beginning and how we dealt with overcoming cultural shocks and differences. Personally, I consider every participant's willingness to share their stories about adjusting to the host country brave because they told personal stories that reflected on their struggles.

As Doyle Global Dialogue is ending, I learned that every individual’s story is unique and that there is always something to learn from them. I learned our societal upbringing, norms, religion, and political atmosphere in our home countries have some, if not a great deal of, influence in shaping our understanding of the world. Therefore, being tolerant and accepting of other people’s beliefs, religions, and cultural values is always helpful to learn different perspectives. I do appreciate that the participants of this program were open-minded and a great source for help as we covered some interesting and controversial topics. 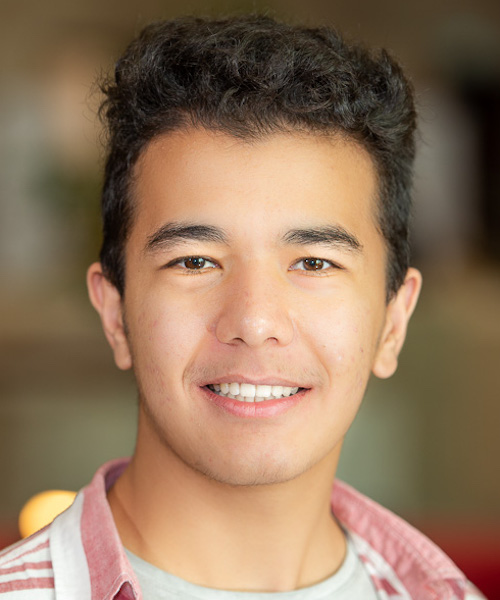 Temur Khujametov (SFS’23) is an undergraduate student at Georgetown University in Qatar, class of 2023. Originally from Uzbekistan, Temur is majoring in international economics. He is sharing his experiences of studying abroad in Qatar as part of the Doyle Global Dialogue in fall 2020.