Reflections from a Half Native, with the Mindset of a New Citizen 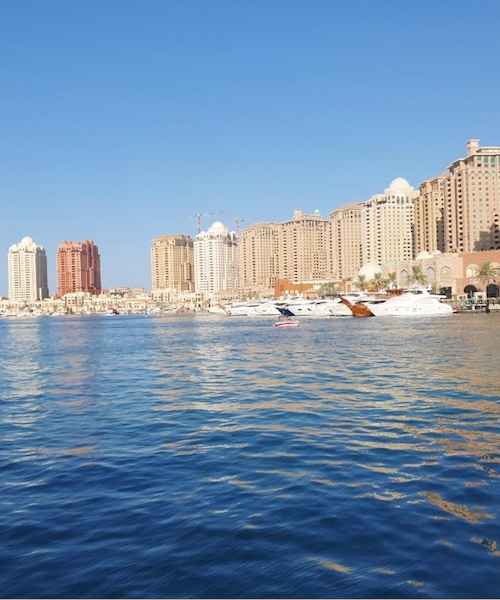 When I started the Doyle Global Dialogue program, what I thought of as norms were mainly vague concepts and ideas from both Egypt and Qatar, considering I was raised in both countries. However, I wasn’t fully aware of the distinct differences each country has that stand out when compared to one another. In our discussions on religion and politics, what I considered in my head to be vague concepts or instances I’ve noticed that stood out to me during my time in Qatar began emerging. What I used to consider “different”—and how that slowly changed into the acceptance of differences—became clearer to me.

Having grown up in Qatar, the norms my fellow classmates considered unconventional were not so different to me as I thought. I felt a sense of surprise or rather confusion when they noted a completely foreign concept or idea in our discussion posts. Although many felt some level of surprise in our exchanges, the immediate understanding or acceptance of the culture that I felt while expressing the different norms in our first discussion was a pleasant surprise; simply put, the longer I lived in Qatar, the more understanding I would become toward their choices or norms or as to why things were the way they are now—that understanding stood out to me in our first discussion on norms in religion and culture.

Our second topic, religion and politics, has shown me the ways in which Qatar defends their norms. For one, looking at the boundaries their people have set for others for the sake of maintaining these norms in order to prevent them from changing due to the high number of residents in the country, that are significantly much more than Qatari nationals. The discussion made me aware of the dynamics between the emir and the people of Qatar that was once again, something I found slightly odd; a vague notion in my head that became more evident the more I thought about the question.

While there were things like loyalty that I could respect the people for, there were also comments I noticed during our discussion that were considerate toward opposing cultures and “the others” residing in Qatar. Becoming aware of both sides rather than having one perspective over the other was another valuable lesson I learned from that discussion. Although I’ve defended what is considered to be “conservative” in Qatar, (which can often be seen negatively from us as liberal students), understanding Qatar’s actions to maintain its religious norms and culture made me more accepting of different mindsets, while also learning that different doesn’t have to be always bad.

Our last discussion on religion and society was one that made all of the differences I’ve been vaguely aware of finally become clear to me. After having discussed the ideas and norms in Qatar and finally living in a society that has implemented these norms and expects you fully to do the same is a process that takes a lot of thinking and cautiousness, I realized that no one is fully cognizant of the effort one has to put in to achieve that. When you go to a completely new area, you start to subconsciously notice the patterns of speech or topics to choose and finally, the approaches you take when initiating conversation. For example, we had one discussion about being cautious when going out with the opposite gender in public areas, as it leads to misconceptions. Additionally, noticing when a recipient shows comfort/discomfort in regard to specific topics, then you integrate all of that into your behavior and speech, in order to make the recipient comfortable and show appreciation to your hosts. I like to think of it as a host inviting you to their home: You cannot start acting inappropriately in their house, and while you may have your disagreements with how things are, you should also uphold a good dose of your actions with respect to what’s normal in their house.

In the end, this experience made me much aware of what I should’ve been aware of: the differences between what I as a person think is normal, and what Qatar does. It has made me more conscious of applying a fair share of both in a respectful manner to the country. That in itself is a lesson I should have learned sooner, and for that I can’t thank the Doyle Global Dialogue program enough; bringing awareness to the differences between us and where we reside, and how it plays out in our university experience and life is not usually brought up, and when it is, it’s regarded with a critical eye, as if we shouldn’t change for the country. Our discussions have made me aware that the key element we’re usually missing when it comes to making a connection between our norms and the host country’s norms is understanding. That is another lesson I’ve come to learn as well. While my ideas haven’t changed much during the program, since I have lived in Qatar for around seven years, I’ve become more appreciative of the differences and the experiences I have gained by sharing them and discussing them in the Doyle Global Dialogue program. Thank you!