Religion in South Africa: The Power to Destroy and Heal a Nation

From the white walls of the Stellenbosch Dutch Reformed Church to the colorful mosques of Bo-Kaap, South Africa remains a highly religious society. Conversations with South Africans of all shapes and sizes expose the great importance laid upon one’s religious belief, ranging from evangelical fervor increasingly found amongst the youth, to the more stoic orthodoxy of the Anglican Church. Throughout South Africa and even across the continent, religion bears a complicated history embroiled in legacies of colonization, oppression, and apartheid. Religion holds power. It was through the cross and the bullet that the continent was dissected by European powers. It was through the pages of the Bible that apartheid was theologically justified, and it was through the Dutch Reformed Church of white Afrikaners that “the races” were declared separate as mandated by God. Yet, it was also through the World Alliance of Reformed Churches that apartheid was acknowledged as heresy. It was through the Christian ethos and through ubuntu that Archbishop Desmond Tutu guided the post-apartheid Truth and Reconciliation Commission through ways of healing in a society bifurcated into “European” and “Non-White;” “have” and “have-not;” "believer" and "unbeliever." Religion has the power to both destroy and heal a nation.

In a discussion about life under apartheid, my South African friend designated as “Coloured”—a category in between “White” and “Black African”—revealed that his parents were once denied communion on Sunday morning due to their sin of attending a “white church” while being of color. Whiteness meant purity and closeness with God; anything less than was deemed as “separate,” “other,” “unworthy”—“impure.” The sharing of bread and wine in the Christian tradition is meant to signify connection between people and between the divine. The denial of such connection, of saying that one was unworthy to drink from the same chalice because of one’s race or ethnicity, is an ultimate denial of humanity. It is an affront to the very word “communion” and an insult to fellowship. Religion was co-opted to subjugate and enforce a system of racial hierarchy. Sunday morning saw no race-mixing amongst God’s children.

Yet today, many South Africans of color find meaning, purpose, and resilience in faith. Though Christianity is the predominant religion at around 85 percent, many South Africans of color, especially those in more rural areas, may blend this belief with local connections to spirits or ancestors. My Xhosa friend told me that when she prays, she also talks with her ancestors and feels a connection: “It’s as if your whole family is standing behind you when you talk to God.” Though religion had been perverted to uphold a racial order, like the Klu Klux Klan’s appeals to Christianity, religion has also been utilized to heal, grow, and prosper. As South Africa faces lingering division and rising economic inequality, it’ll be up to the people of South Africa to see if they turn such faith into positive action. Knowing the determination and vibrancy of today’s youth, I suspect the future is ready to be built together in communion. 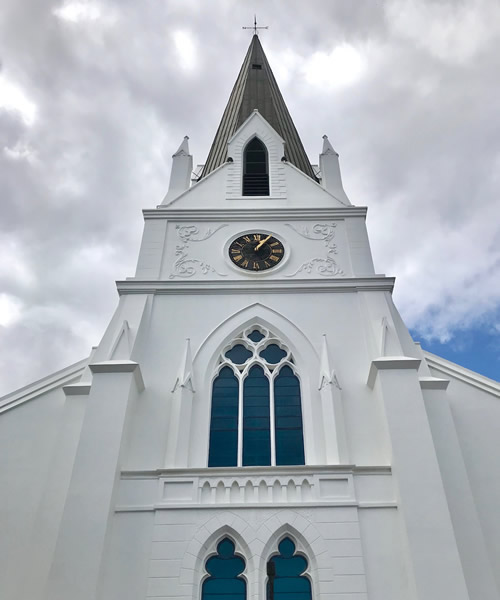