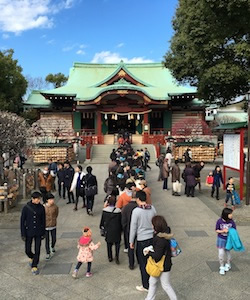 On the stuffy train ride back to the office from a meeting with a firm, my internship supervisor and I shared bits and pieces about our lives, and I learned that she was Catholic.

In 1550, St. Francis Xavier, S.J., one of the first Jesuits, sought permission from the emperor in Kyoto to spread Christianity in Japan. Just 37 years later, the general Totoyomi Hideyoshi banned Christian missionaries.

Over 400 years later, relatively few people in Japan are Christian—around only 1 percent report to practice it. And yet here was one of them, sitting with me on a train. “I only go to church during Easter and Christmas,” she smiled. “I’m not a very good Catholic.”

At the Catholic church I went to during my childhood, young Sunday school students would line up outside of the chapel after Mass, holding little record books for the presiding priest to stamp, marking their attendance. Getting a perfect attendance record might have shown that you were a “good” Catholic, but it did not necessarily mean that you discovered what Catholicism meant to you.

Although religion has been exploited in modern Japanese history for unfortunate reasons—during World War II, state Shinto artificially generated feverish devotion to the emperor, and in the 1990s, a religious cult orchestrated a deadly terrorist attack on the Tokyo subway system—no one religion dominates Japanese life. Over the course of his or her life, a Japanese person will celebrate childhood at a Shinto shrine, marry a partner at a Christian wedding, and die at a Buddhist funeral. On Christmas, which is a workday in Japan, friends and family gather for fried chicken rather than for the birth of Jesus, thanks to a wildly successful 1970s marketing campaign by KFC’s Japanese franchise.

The notions of being a “good” or “bad” religious follower don’t really exist in Japan, because many Japanese people simultaneously believe in the existence of ubiquitous gods without necessarily subscribing to a faith or religious doctrine. These kami-sama manifest themselves everywhere, whether they be a 1,000-year-old tree or Mount Fuji.

As a result, many people ranging from local residents to foreign tourists, participate in rituals and worship activities at Shinto shrines or Buddhist temples, even if they are not Shinto or Buddhist. Whereas tourists sit in the nave of a European cathedral and silently admire its awesome high ceilings and irreplaceable stained glass, visitors at Shinto shrines and Buddhist temples in Japan indulge in offering coins to the local kami-sama, buy protective charms, and dance in summer matsuri festivals, where the kami-sama (or at least its physical manifestation or spirit) is placed on an elaborate float and paraded down on the city streets.

While the lavish summer matsuri are still some time away, I recently had the pleasure of visiting the Kameido Tenjin Shrine, which was dedicated to the god of learning. At the shrine there was a mini-festival celebrating the plum trees in bloom. There were vendors selling chocolate-coated bananas and fried chicken. A young man was performing sarumawashi, a traditional art involving a trained monkey doing handstands and two-legged tricks, on the shrine grounds. It was a perfect Saturday afternoon.

As children were busy writing wishes to excel in their school entrance exams on wooden placards to hang in the shrine, and as tourists snapped photographs of the flowery trees, I joined the very long line to go up the steps to worship the kami-sama in the shrine’s grandiose building. I threw my 5-yen coin into the offering box, clapped twice, bowed deeply, and made my wish for a good semester at Waseda University.

Whether I truly believed that this kami-sama would condone my sins, or that there was a presiding priest enforcing my perfect attendance record at this shrine, or that I had to go through some sort of final examination in order to properly worship the god: none of that mattered. At the top of the steps, basking in the fresh, spring sun, I was happy to share my brief moment with the local god.