Sarah Stern on the Westernization of China

Browse through the current affairs section of any bookstore in the United States, and you're guaranteed to come across numerous books hailing China as the emerging global superpower. As soon as China becomes a fully industrialized nation (the argument goes), it will overtake the United States as the great world power. Given China's constantly growing economy, especially when compared with the United States’, this idea that would have been ludicrous 20 years ago no longer seems so improbable. But we have to ask, at what cost? In my last post I talked about religious and political suppression, which are the problems that come to mind when most Westerners think of China's problems. Being in China for over two months now, however, has made me aware of the nation's obsession with becoming Western and middle class, issues the country needs to address before it can fully realize its potential as a player on the world political stage.

In the past few years I have read many articles detailing the “Westernization” of China, but it wasn't until I actually got to Beijing that I understood the full extent of its reach. It's not just that there are KFC’s on every corner and American brands everywhere; it's the fact that these have replaced anything that could be considered “Chinese.” When we think of Chinese culture, we think of Confucius, the Great Wall, calligraphy, ceramics—all of which are important parts of the Chinese identity, but also ended hundreds, if not thousands, of years ago. We're thinking of the culture of Chinese dynasties, which ended in 1911 with the founding of the Republic of China. What comes to mind when we think of China's contribution today? A quick survey of my friends from home came up with “cheap plastic crap” and “fake designer bags.” Is this really what China has come to? And to make matters worse, even these aren't even legitimately Chinese—the “plastic crap” is exported to the Western world, and the knock-off goods are just replicas of Western designs. Walk down any street in Beijing and the great majority of the people you see will be wearing head-to-toe, knock-off Western clothes. Visit the famous Silk Market and instead of silk, you will find six floors and thousands of square feet of imitation designer clothes, bags, jewelry, even makeup, and headphones.

When I stopped to think about it, I realized that what China is striving to become is a second-rate copy of the United States; in a sense, the nation wants to become exactly like the fake Gucci purses that are so ubiquitous here. Disillusioned, I tried asking Chinese people what they saw as their modern culture, but they just talked about ancient philosophers and the fact that “China has thousands of years of history,” something the government is fond of repeating. This is true, of course, but it completely ignores the question of modern China's contributions. China has the largest population of any country and makes up almost 20 percent of the world's population, so it is pretty shocking that modern China (defined as 1911 to the present) has produced no great artists or musicians and only one great writer (Lu Xun).

What, then, does this say about China? Why does China have this great desire to become Westernized at the expense of its own identity? Many people are quick to point out the fact that one of the Communist Party's original goals was to wipe out any trace of Chinese culture, viewing it as a hindrance to modernization (in fact, the Cultural Revolution was anything but). This is certainly a large factor, as is the fact that China still heavily censors its media, making it much more difficult for the arts to flourish.

However, I think that another problem is that Chinese society does not encourage individualism or creativity. In schools, students are taught obedience and memorization and never really learn to think for themselves. In one of my classes, the professor asked what characteristics parents desired for their children to have. When the American students named things like independence, problem-solving skills, and compassion, the professor and the other Asian students were shocked. They said that in China, obedience and good grades are the things that matter most. With this kind of attitude, it is much more difficult for new ideas to be created and spread. The concept of “thinking outside of the box” is completely foreign here, and I think that this is one of the problems that is holding China back. The nation needs to create and appreciate its own identity, and to do this, I believe that it needs to put more value in independent thinking. 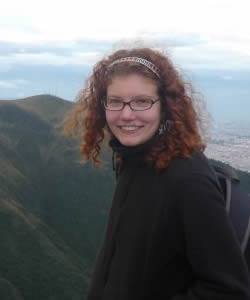 Sarah Stern graduated from Georgetown in 2010 with majors in Chinese and Spanish. She participated in the Berkley Center's Junior Year Abroad Network while studying in Beijing, China during the fall semester of 2009.