For the past three months, I have had the pleasure and honor of volunteering at a Tokyo-based NGO called Lighthouse: Center for Human Trafficking Victims, where I have been primarily assisting with their public relations and advocacy work. Founded by Shihoko Fujiwara, who has been a powerful advocate for human trafficking survivors in Japan and abroad, Lighthouse was originally designed to assist migrant survivors of forced labor. But they have moved on to focus on an issue closer to everyday Japanese life.

Walk down the main avenue in Akihabara, the mecca of Japanese pop culture in Tokyo, on any weeknight and you will see dozens upon dozens of young girls, dressed in their infamous "sailor-suit" schoolgirl uniforms, asking whether you are interested to, for a fee, have a chat with them, or take them around town for a walk. A compensated date, or enjo kosai, between a minor and her male client may end with a night of child prostitution. Walk across the scramble crossing in Shibuya, a busy commercial district for young people, and you may be accosted to join a model photo shoot. That photo shoot may become a filming session for a pornography video.

In Japan, it is normal for high school and college-aged students to work part-time jobs to earn money on the side. I myself recently got a job working at a convenience store on campus. When marketed as an easy, high-prestige, and high-paying job, modeling or compensated dating appeal to youth who live in a culture of consumerism and/or grow up in relative poverty. Shame, embarrassment, and the threat of legal action from the companies can coerce these survivors of child prostitution and pornography into silence. Each week, Lighthouse receives calls from these survivors, and it provides confidential counseling and assistance over the phone, through text messaging, and in person.

When a city in Osaka Prefecture made an agreement with a major convenience store chain to cover up pornography magazines in plain paper packaging, publishing industry associations responded in a high-profile statement objecting to the agreement on freedom of speech grounds. Travel guides to Japan now highlight Tokyo’s maid cafés, where young female waitresses dress up and treat their "husband" customers like royalty, and merchandise stores, where you can purchase full-size body pillows complete with prints of your favorite schoolgirl-aged anime character, as must-see attractions for foreign visitors. When the Japanese government finally banned child pornography in 2014, anime and manga were not included because they were not "real" depictions of children.

While these other industries do not necessarily have a direct connection to child pornography and prostitution in Japan, in my personal opinion, they do engender a social tolerance and norm that sexual commercial activity involving children is acceptable. Or perhaps, from a foreign perspective, this is something that is inevitable and exotic, a phenomenon that will only happen in Japan because it’s Japan. But, of course, it’s not: all countries share issues of child poverty and helping youth get back on track, especially in Hong Kong, South Korea, and Taiwan where compensated dating is spreading, and child prostitution and pornography are unacceptable anywhere in the world.

So for those who are wondering whether to step into a Japanese maid café, or to purchase that large print of an illustrated schoolgirl with her skirt flapping in the wind, think twice on whether you want to financially contribute to this social tolerance on the sexual commodification and objectification of children. And for those who are looking to study abroad in Tokyo, I would recommend to anyone who would like to volunteer even just a little bit of their time to Lighthouse, who stand with a group of other NGOs on the front lines of changing this devastating norm in Japanese society.

(The opinions in this blog post are my own and do not necessarily reflect those of Lighthouse: Center for Human Trafficking Victims or its staff.) 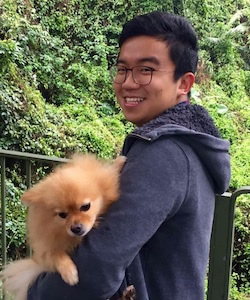 Kenneth Lee graduated from the Georgetown University's Walsh School of Foreign Service in 2017 with a major in international politics. He studied at Waseda University in Tokyo, Japan during the spring 2016 semester and blogged for Berkley Center's Junior Year Abroad Network.