"Sociales No Vota a Macri": Election Year Politics in Argentina 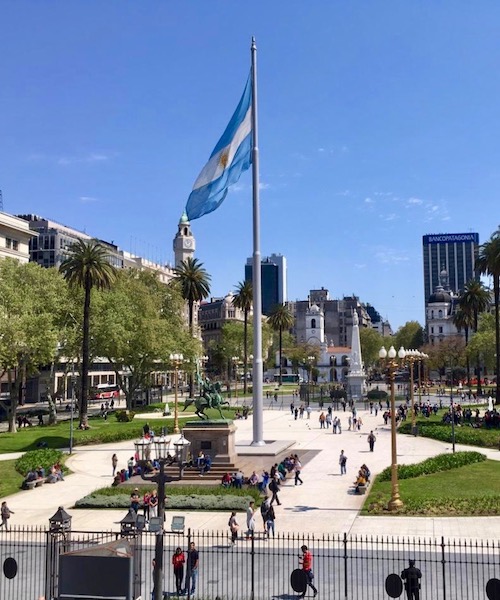 On the eve of Argentina’s presidential elections, the outcome seems to be predetermined: Center-right incumbent Mauricio Macri is set to experience a resounding defeat from populist candidates Alberto Fernandez and former president Cristina Fernández de Kirchner. This reality would have seemed strange to anyone several years ago, when many saw Macri’s election as the start of a new era for Argentina. However, after four years of reforms resulted in yet another economic crisis, Fernandez and Kirchner are set to take over the reins.

Argentine politics have always been polarized, swinging back and forth between populist and neoliberal governments, and as a result, most Argentines blame one of the two ideologies for their political problems. Peronism, on the one hand, is based on the policies of former president Juan Domingo Perón that can be described generally as social welfare-oriented populism. In this election, Fernandez and Kirchner represent these kinds of policies. Conservatives criticize this approach for promoting an unsustainable economic model that has closed off Argentina from the rest of the world through inwardly oriented development. On the other hand, populists blame neoliberalism and free-market reforms, generally supported by the United States and the International Monetary Fund, for several economic crises resulting in disastrous levels of foreign debt, poverty, and unemployment.

This complicated political discourse has become apparent to me over my past three months here, a semester that has been filled with constant class conversations about past economic policy and long dinners that often end well past midnight in heated but amicable discussions over the upcoming elections. As anyone will tell you, porteños (Buenos Aires locals) are not shy about politics: Asking someone about their views on abortion or critiquing their choice in a presidential candidate is not considered a taboo or social misstep. During my first day at the University of Buenos Aires, over four student groups interrupted a lecture to hand out pamphlets in support of Fernandez, titled with the words Sociales no Vota a Macri (“[The Department of] Social Sciences Doesn’t Vote Macri”).

Jokes are often made by both locals and outsiders about the Argentine people’s love of sitting at dinner and debating politics for hours on end while their country continues to experience crisis after crisis. “We love to talk and talk and never get anything done,” my host mom joked on one of my first days in the country. And while it is true that Argentina is somewhat of an economic and political quandary at times, the political culture, to me, does not reflect this disarray. As an outsider, I am constantly impressed by my film-major host sister’s knowledge of economics and world affairs, listening to her explain topics like utility subsidies and labor unions before pivoting the conversation to the newest Quentin Tarantino movie. I feel slightly embarrassed when my host family asks me my opinions on the latest developments in the 2020 presidential race, knowing that my knowledge of the U.S. government is certainly inferior to their understanding of Argentine politics.

Clearly, Argentine voters are frustrated about living with constant instability and unfulfilled promises. As a result, however, the electorate is both informed and passionate, a reality that I rarely experience or hear about in the States. As concerns over the political and economic future of Argentina continue to grow, an increasing number of news articles emphasize the polarization in the country over ideology; regardless of political views, however, it feels as if maybe other countries could do well to take a cue from the political culture itself.