Tablighi Ja’maat and the Regulation of Women in Bangladesh

In Bangladesh, elite, well-educated women are increasingly choosing to immerse themselves in the Tablighi Ja’maat, a movement that is impacting their roles as women, mothers, and members of Bangladeshi society in new ways.


The Tablighi Ja’maat, is a global Muslim missionary movement started by Muhammad Ilyas in 1926 in India that seeks to bring Muslim conduct in line with the life and teachings of Prophet Muhammad. The goal is to create the golden age of Islam (Khilafat) through invitation (tabligh) to nominal Muslims to return to the six pillars of Islam as espoused by their leader. Today the movement is present in 150 countries, with the largest presence in South Asia. With the migration of South Asians to North America, Europe, and Australia in the 1960s and 1970s, the movement has spread to all parts of the world. Bangladesh has a robust Tablighi movement, and it holds the annual pilgrimage known as Bishwa Ijtema where over two million Tabligh followers gather representing different Muslim countries.

My research focused on the induction of women into the Tablighi Ja’maat ideology through weekly instructions on its six pillars: kalima (belief in the oneness of Allah), salah (daily prayers), ilm and zikr (remembrance of Allah and fellowship), ikraam –e-Muslim (to treat fellow Muslims with respect), tas'hih-i-niyyat (to reform and devote one’s life to Islamic ideals), and dawah (to preach the message of Allah). I conducted the research with two research assistants, one female and one male, over a period of four months. The women we met were leaders in their group, college-educated and from the upper-middle classes. The research was based on interviews with women, participation in their weekly seminars, and analysis of the sermons (boyans) that addressed Muslim women’s social roles and duties.

This is a mosque-based movement with a strict hierarchy and power based with the central mosque leadership in Dhaka. There are local mosques in each district connected with the central mosque. Each week the central mosque leadership sends the same sermon along with its interpretation to the mosques all across the country. The role of the clergy is to deliver the sermon verbatim, not to interpret or change it. There are separate sermons for men and women because they are seen as fulfilling different social roles. The women’s sermons focus on the private aspects of life, that is, on a women’s duty to her husband, her in-laws, and children. It also emphasizes the importance of purdah for Muslim women, motherhood, and the importance of sexual modesty. The social life of the women and their families are organized around the mosque’s teachings. The Tablighi followers want to replicate the life and times of Prophet Muhammad and the four Rightly-Guided Caliphs. Inside their homes, they eschew furniture, and instead have carpets and cushions to sit on. TVs, radios, newspapers, and magazines are not allowed in their homes. The men have access to the media since they participate in public life; women, because they stay at home, do not have such access to information. When I asked the women questions on contemporary issues, they would respond by saying that during the time of Prophet Muhammad crimes did not occur because Muslims followed the right path. For example, they said that sexual violence against women occurred these days because women had strayed from purdah and had entered the labor force as garment workers.

Similarly, sexual life is strictly regulated. The women wear simple clothes and always keep their heads covered, although some of the women wear substantial amounts of gold jewelry. Space is strictly gender segregated. Husbands and post-pubescent sons would not come into a room if non-kin women were present. Women would indicate to their husbands that a non-kin woman was in the room by saying “purdah” which meant that they should not come in.

The majority of the women join the movement through marriage. Many of these women are highly educated, that is, up to the master’s level in some cases. Following their induction, the women observed the strict code of Islamic bodily comportment in attire and attitude. Women as mothers are in the vanguard of inculcating Tabligh Ja’maat values to their children. Most of the women are stay-at-home mothers, and they primarily socialize with women in their group. Their sons are sent to madrasas (Islamic seminaries) with the expectation that they would later join the clergy. For young boys to become Qur'an-e-Hafez (to be able to read the Qur'an by rote without any knowledge of classical Arabic) is a sign of status for the families. The education of young girls is restricted. Some of the women who had college education themselves had withdrawn their daughters from schools and home-schooled them in Qur'anic studies. As one woman explained to me, “Qur'an is a complete way of life. What else does my daughter need to know?” But there were others who encouraged their daughters’ education. I met one young woman who planned to be a lawyer with her Tabligh father’s support. Overall, the daughters are primarily raised to be “good” Muslim mothers for future generations of Muslims. This was emphasized repeatedly in the weekly sermons held at the local mosque and was a strong motif in my conversations with the women.

Prior to the 1990s, women were not in the mosque movement. With globalization, there has been an increase in Islamic TV shows from the India, Middle East, and Malaysia that cater to Muslim women by offering them varying Qur'anic interpretations and advice. Women’s access to global media alerted the male leadership to include the women in their mosque activities. Otherwise, they recognized that they risked losing their members to competing ideas about Islam. This resulted in the women’s mosque where women now meet weekly. Women’s mosques have ensured that the women remain within the interpretations of the Tabligh leaders and do not stray from the fold. Moreover, women are encouraged to form neighborhood committees, so they did not have to travel out of their neighborhoods and encounter non-kin men. The women’s lives are organized around weekly mosque and neighborhood meetings. This has led to a network developing of women who monitor the activities of the other women through these committees. If a woman fails to show for a weekly meeting, especially when her husband was away on a religious tour, the women in the group would visit her home to inquire about her welfare and offer her assistance if needed, but would also closely monitor her behavior.

An important duty for male members of the movement is to spend a mandatory 120 days a year traveling away from home to spread the word of Allah. Since men are absent from their families for such long periods, it is important to include their wives in the movement. This ensures that other women in the group would look after their wives and children, and also functions as a surveillance mechanism in their absence. Similarly, women felt that because their husbands were devout men they were less likely to spend time with another woman, or take a second wife while they were on their missionary work. In fact, during the 120 days of missionary work, the men travel together, stay in their mosques, and listen to regular sermons. Mosque activities keep the men busy and within the regulation of the mosque.

The giving and sharing of food and hospitality toward strangers is widely practiced within the community, an ideal termed Ikramm-e-Muslim. Within the group, richer families did provide for the poorer families or helped them in times of distress. I also found that poorer women joined the movement because marriages took place within the group, and dowries were not exchanged. Often an older woman would become the patron of a poorer woman and help her get married. Marriages within the Tabligh Ja’maat were inexpensive affairs that made it attractive for lower-income women to join the group.

Thus, belonging to the mosque movement not only provides members with piety, but also provides a social safety net for men and women. Overall, Tablighi Ja’maat members have a sense of community and belonging that is absent in wider Bangladeshi society.

Tablighi Ja’maat adherents withdraw from public life and dedicate themselves to spreading the word of Allah. Such a strict code of life will have adverse effects on the younger generation of girls and boys who are not being schooled in modern education. This will create a generation that will not have the skills to function in the twenty-first century. That said, there are some important lessons to be learned from the Tabligh Ja’maat movement. The movement has offered women and men networks of care and community, forms of fellowship that are getting lost as Bangladesh modernizes. 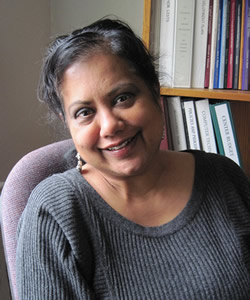 Lamia Karim is an associate professor and associate head of anthropology at the University of Oregon. Her research interests are in globalization, modernity, gender, and social movements. She is the author of Microfinance and Its Discontents: Women in Debt in Bangladesh (2011), which is a radical critique of the relationship between women and microfinance in Bangladesh. She is currently working on a new book manuscript entitled Body in Change: Female Muslim Modernities in Bangladesh. Her research has received support from the National Science Foundation, Harry Frank Guggenheim Foundation, Wenner-Gren Foundation for Anthropological Research, and a Fulbright Scholarship. She is also the recipient of two Rockefeller Postdoctoral Awards.
comments powered by Disqus