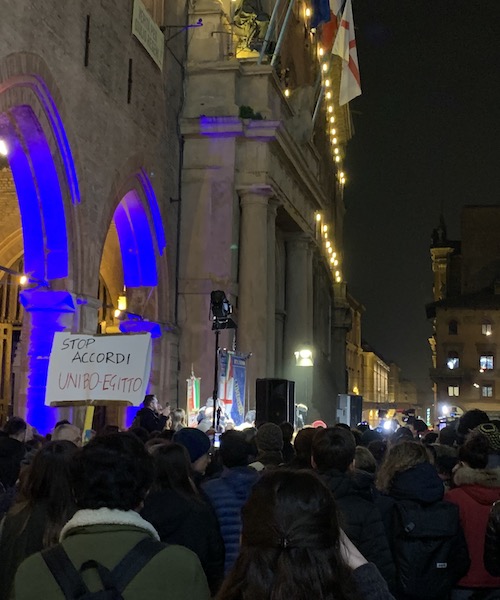 When I arrived in Bologna, land of la dotta, la grassa, la rossa (the learned, the fat, the red), I expected to take advantage of the university’s renowned academics and the city’s famous cuisine, but I didn’t think Bologna’s history of communist protest would be especially relevant to my experience. To some extent, I was right. Despite the bright red mural on the main study hall, and the street graffiti commanding me to “eat the rich” on my way to class, Bologna’s legacy as a stronghold of communist support in the mostly conservative north did not play a significant role in my semester. The city’s legacy of political protest and student activism, however, did.

All along Via Zamboni, Pierfrancesco Lorusso’s eyes stared at me from his graffitied face. Lorusso, a leftist militant, was killed by police during a 1977 student protest against a conservative Catholic group. The intersection of political and religious tension didn’t begin or end with this event; the intersection of Catholic social teaching and Italian politics made for progressive labor laws but conservative gender stereotypes. Nowadays, politics and religion are less tightly linked, but the Church’s influence remains strong in rural areas, as I learned by talking to employees at Bologna’s LGBTQ+ center. Unlike the young Italians I knew, I attended Mass every week in Bologna. I felt a pronounced disconnect between the somber, formal atmosphere inside the church and the casual conversation between students. Churches in Italy serve both as places of worship and as museums. With soaring marble columns and priceless paintings, these spaces are not designed as venues for radical change. Protests take place in the squares outside of churches, not inside of them. To me, the physical difference between spaces used by religious worshippers and spaces used by students seemed to represent a religious divide between conservative and progressive points of view.

Lorusso’s image represents one moment in Bologna’s history of protest. The image of Patrick Zaky represents another, more recent moment. Zaky, a University of Bologna student and human rights activist, was arrested and tortured while visiting family in Cairo last year. Students have been protesting in favor of his release ever since. On my way home from my Romantic literature course one evening, I found myself in the midst of one such protest. People packed the street all the way from the university buildings to Piazza Maggiore, just two minutes from my apartment. They waved signs demanding Italy break diplomatic ties with Egypt and chanted, “Zaky libero, libero, subito”—“Zaky free, free immediately.” Protestors illuminated the piazza with a red flare as musicians performed in front of the Basilica of San Petronio and local officials gave speeches from beneath the porticoes.

Until that moment, I had only learned about Bologna’s tradition of student advocacy: in orientation class and at the Museum of the Resistance, in overheard political chatter from students in bars, on posters bearing slogans for which I had no context, and from witnessing small demonstrations almost daily in Piazza Maggiore. Only once I stumbled into a protest right outside my classroom did I begin to consider myself an active participant in Bologna’s student life and in the city’s long history.

Two weeks later, I found myself quarantined at home in Connecticut.

I worried the coronavirus crisis in Italy would end the movement for Patrick Zaky’s liberation. I was sure it marked the end of my connection to the city and University of Bologna, known familiarly as Unibo. Fortunately, neither proved to be true. The movement for Patrick Zaky continued online, and the Egyptian government’s announcement in late June that they will release 530 prisoners has given advocates hope that Zaky will be released. Back home, I took online Unibo courses in contemporary Italian literature and the history and institutions of Africa. The literature class focused on the anni di piombo (Years of Lead), Italy’s years of terrorism during the 1960s, 70s, and 80s. Some of the authors we read urged continuous revolution, others warned against violent rebellion; all acknowledged the corrupting influences of power and the hardships of those marginalized by society.

When the Black Lives Matter movement came to the forefront of national news after the death of George Floyd, I found it difficult to concentrate on classwork. Contemporary Italian literature felt irrelevant in the face of profound tragedy in my own country, and studying for the final felt trivial in comparison to the racial justice work, both inward and outward, that I needed to do and had failed to prioritize for so long. Fortunately for my grade, I soon realized how relevant this genre of Italian literature was to the present moment. In the words of Sciascia, Bianciardi, and Eco, I found useful perspectives on oppression, power, and revolution.

My history and institutions of Africa class also prepared me to engage with the Black Lives Matter movement in a more meaningful way. We learned about the myth of the bella gente, the idea that Italians are “good people,” and therefore “good colonizers” who couldn’t possibly have committed the kinds of atrocities other European colonizers did. Yet Italian troops bought and raped young girls in Eritrea, put families in detention camps in Libya, used mustard gas on families in Ethiopia, and even massacred Ethiopian priests. In 2012, an Italian town erected a memorial to the general who carried out the worst of these atrocities. My classmates and I were shocked to learn how oblivious most Italians are to their own history. Obviously, erasure of anti-Black racist history is not unique to Italy—or to the United States. Just as Italians may take pride in the Resistance but deny responsibility for fascism and atrocities committed in Africa, many Americans take pride in Revolutionary history but deny responsibility for the system of slavery that continued as systemic racism.

Learning about Italians’ blind spots has helped me to see my own. Learning about Italian revolutionary movements has helped me learn what kind of activist I do, and don’t, want to be. Despite my abrupt departure, I plan to return to Bologna with a deeper understanding of its at times contradictory history and with a greater sense of connection to its legacy of student protest.