Tear Down This Wall

October 3 marks German Unification Day (Tag der deutschen Einheit), a national holiday for the reunification of Germany after the fall of the Berlin Wall and the subsequent collapse of the German Democratic Republic (GDR). The holiday, however, is a bit of a misnomer: Germany was not actually unified on any historical October 3 nor did the Berlin Wall come down on that date. The notorious Berlin Wall fell on November 9, 1989—the same day as Kristallnacht. So what happened on October 3? Actually, nothing. That date’s neutrality is precisely why that date is marked as the national holiday “celebrating” German reunification.

One of the major reasons I wanted to study abroad in Germany, and more specifically Berlin, during the fall semester was because this year marks the thirtieth anniversary of the fall of the Berlin Wall. I wanted not only to experience the significance of the event in the place where it transpired, but also to see how a national holiday commemorating a positive historical development would be carried out in a country where the concept and outward projection of national pride is a hotly contested topic. The question of whether or not Germans should have and display national pride is an important political question in the modern-day German society.

I actually had the chance to debate this topic in one of my courses here in Berlin, as well as to hear the perspectives of some native Berliners on the subject. A myriad of opinions about the controversy exists, thus making it difficult to generalize the way Germans approach the subject of national pride. It cannot be denied, however, that the political and social acceptability of being proud to be German, as well as showing this pride, is far from a foregone conclusion. Some Berliners I have talked to actually see any celebration of national identity as being one and the same with the denial of the country's dark chapter under the Third Reich. Although this is an extreme position, I do think it is interesting that in the United States, generally speaking, a basic level of national pride seems to be much more widely accepted compared to the debate in Germany, even though we have had our own dark moments in history. I found myself asking the question: can one be proud to be an American and simultaneously disassociate this pride from historical realities such as Japanese internment camps, slavery, and Abu Ghraib?

The class debate regarding pride in one's German national identity, which was held in early September, only added to my anticipation for the holiday, since it was in fact Germans (East Berliners) who overwhelmed the border guards that night in 1989 and forced the opening of the border with West Berlin. Additionally, in my course on German memory politics, I learned about how some in Germany view the Berlin Wall as having been a “just punishment” of sorts for the actions of Germany in World War Two. Needless to say, I was very intrigued to see what the celebrations of German Unification Day were going to be like.

In the days leading up to October 3, I tried to research events around the city commemorating the date and celebrating the holiday. All I could come up with was a street fair on Straße des 17.Juni, the street leading up to the Brandenburg Gate. Similar to national holidays in the United States, we were given the day off from lectures. Public transportation followed the “holiday” schedule. My fellow students and I made sure that our travel plans for the weekend allowed us to fully take advantage of the incredible and unique opportunity to experience the celebration of thirty years of German post-Cold War unification in Berlin.

On the morning of the holiday, I asked my host mother what her plans were for the holiday and if she had any recommendations for events and celebrations around the city, since my search for activities was largely unsuccessful. In the course of asking my questions, I noticed her demeanor shift to confusion. She answered by saying that she did not have any special plans at all but that there is usually a street fair that might be worth checking out. I was a bit shocked by her reply, given that I had such high expectations for the holiday, though I was not really sure what to make of it.

I remember learning about German Unification Day during my first semester of German at Georgetown as the day when the notorious Berlin Wall finally came down. I remember the excitement of realizing that I was going to be in Berlin for not just the celebration of German Unification Day, but the thirtieth anniversary of that unification. My interest in German Cold War-history and the symbolic significance of both the construction and destruction of the Berlin Wall were major components in my decision to study German in the first place. I had been looking forward to the October 3 celebration since my application to study in Berlin for the fall was accepted. I was anticipating a superb day of remembrance and celebration. Instead, I enjoyed some decent, overpriced street food at a lackluster street fair.

It would be incorrect to characterize my emotions as ones of disappointment. Rather, the experience was one of sobering self-reflection: I had unfairly manufactured enormous expectations for the October 3 holiday. I had expected American Independence Day-level festivities, thus making a false equation. Though I recognized that the events celebrated by American Independence Day and those celebrated by German Unification Day are very different, I incorrectly assumed a connection between the meaning of these celebrations. Looking back at my expectations now, I viewed both events as celebrating crucial developments that lead to the modern establishment of the respective current countries. I had constructed my expectations for the celebration around my own conceptions of the significance of the fall of the Wall and personal experiences with national holidays. I also assumed that because October 3 is denoted as German Unification Day, the celebrations of unification would, in fact, take place on that day. I failed to realize that just because October 3 bears the moniker of “German Unification,” Germans do not necessarily celebrate the events of November 9 on that day, thus setting unfairly high expectations for the holiday of another country, in which I was merely a visitor. After all, nothing did actually happen on October 3.

There are advertisements and flyers posted around Berlin in remembrance of what happened in 1989 and there indeed plans for various events commemorating the fall of the Wall that are set to take place on the days leading up to November 9. I think the division between the day that is officially denoted as being a holiday and the date bearing historical significance is especially interesting. According to the way this division was explained to me by native Berlins, the use of October 3 is a result of the aforementioned historical reality that the fall of the Wall was not the only event to transpire on a historical November 9 (Kristallnacht). Nevertheless, based on the advertisements I have seen, it seems as though there will still be festivities on November 9, or at least on the days leading up to it. That division leads me to question what meaning and connotation the word holiday—more specifically, national holiday—carry. Just because the politically recognized day of celebration is October 3 does not necessarily mean that people in Germany ignore the reality of history.

I am not sure exactly what to expect for these events or how they will compare with my experience of the October 3 national holiday. Although I know to reserve judgment and expectations for the celebrations themselves, I cannot help but feel anticipation for November 9 and the knowledge that, thirty years ago, regular people brought down a concrete symbol of inhumanity and forever changed the world on the streets I walk on to get to class. 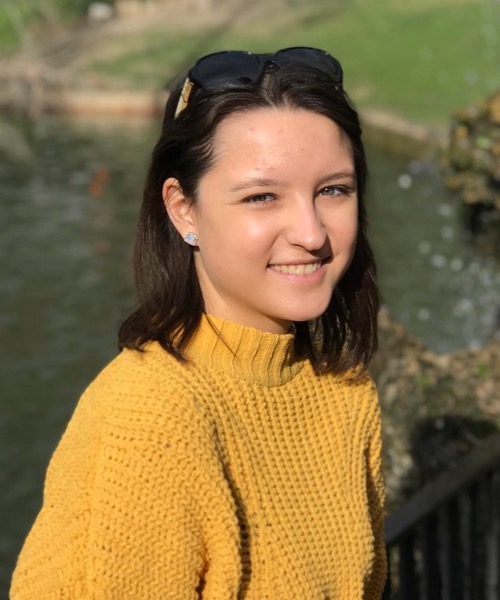 Anna (Ania) Zolyniak (SFS'21) graduated from the School of Foreign Service in 2021, having majored in international politics with a concentration in international law. Ania spent the fall 2019 semester in Berlin, Germany through IES Abroad, during which she shared her observations from Berlin through the Junior Year Abroad Network.