The Changing Role of Guanxi in Chinese Society

Long before networking and the old boys club, the concept of guanxi, which translates to relationships, was already pervasive and entrenched in Chinese society. Guanxi not only describes the personal relationships between two people, but also the social exchanges and obligations between the two people. A very important aspect of guanxi is the reciprocal nature of relationships. For example, when one does a favor for another, there is a clear social expectation that the other party will return the favor sometime in the future. Subsequently, guanxi dictated a person’s social status.

Guanxi has long been present in Chinese society, originating from Confucian ideas of social harmony. According to Confucian thought, every individual must know their role in society and play that role well. As a result, each individual must take on certain responsibilities in respect to their relationships with others. The ultimate goal, social harmony, is a social order and greater good that every individual must work toward. Through a natural progression of thought, social order came to emphasize the collective possessing more importance than the individual, which soon came to characterize the relationship between individuals and society in China.

Even in modern times, guanxi still plays a dominant role in daily social life. It still determines an individual’s social status, including her social circle, education, and job. However, as China seeks to reform its political, economic, and social system, the presence of guanxi creates limits for full and effective reform. For example, if the officials of a major governmental agency are appointed based on guanxi, there is no assurance that they have the experience or knowledge required to lead the agency, especially through a period of reform.

Additionally, many credit the continued presence of guanxi in politics with the rise in corruption and the lack of transparency. This is not to say that a person’s merit is completely ignored in their rise in society, but the overall influence of guanxi is still prevalent enough to create obstacles to the effective reforms.

Take the American Dream for example, which proposes that each person can prosper and achieve success through hard work, courage, and determination. This fundamental hope in American culture clearly emphasizes the individual’s ability and actions. Yet this attention to individualism tends to ignore the importance of relationships and interconnectedness in society that allows individuals to flourish. In some ways, the focus on individualism has produced attitudes lacking a sense of social responsibility. When one individual succeeds and rises up in society, often times someone else must fall. Perhaps more importantly, an individual’s success is almost always the product of other people’s hard work and commitment to that person or their roles in society. 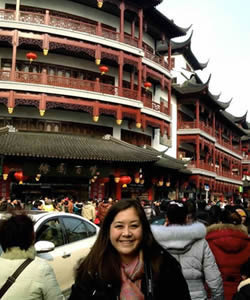 Jessica Ann graduated from Georgetown's School of Foreign Service in 2014 with a degree in international political economy. She participated in the Berkley Center's Junior Year Abroad Network while studying in Beijing, China during the spring semester of 2013.