The Crossroads of Religion and Culture in Qatar

How do religious values shape culture? And how do we distinguish between religious and cultural values in Qatar, where Islam is the predominant religion? These are the questions I reflected on while studying at Georgetown University in Qatar and participating in the Doyle Global Dialogue.

In Qatar, there is a strong emphasis on tradition and unity in the family. These values are drawn from Islamic and cultural values and govern Qatari culture and inform daily life. A simple example is how the working week in Qatar and the rest of GCC countries begins on Sunday and ends on Thursday, where Friday and Saturday are the weekends. As Islam is the dominant religion in Qatar, the working week is designed to ensure that Friday, the holy day for Muslims, is a day of rest. After the Friday afternoon prayer, most people gather for a family meal and meet with extended family. Such an emphasis on family is similar to Goa, my home state in India, where most of my friends get together over the weekend for a small meal with family. In addition, most houses in Qatar have a majlis, which is an outdoor sitting space for gatherings, conversations, and meetings. The majlis is also a space where important discussions about family and professional life, as well as other matters, may be held. In a sense, the majlis can serve not only as a space for conversation but also as a space for dialogue. Seeing how the working week is designed around religious days and how the home adapts to cultural norms underlines how religion and culture are intertwined in Doha.

In Doha, the capital city, conversations may continue in coffee shops and restaurants over a cup of coffee or karak (tea). In Qatar, most meals are followed by karak—which is milk tea served hot, sometimes spiced with cardamon—and coffee (Arabic, cappuccinos, or other kinds). Over coffee and karak, social and work relationships are made in Doha. Most public spaces in Doha have a prayer room, and it is very acceptable and normative for people to excuse themselves from a meeting to go pray. In this way, not only is religion (specifically, Islam) very visible in public life, but religious values inform cultural practices. Most people, even if they are not Muslim, use phrases such as Alhamdulillah (praise be to God) or Inshallah (if God wills) in their conversations at work and socially. In a sense, it is fair to say that words with religious undertones have gained “cultural” prominence in Qatar as they are frequently used by many in everyday life.

Once, I interacted with a man selling bangles, mirrors, and handicrafts on a wooden plank, which served as a street-side shop, in Souq Waqif in Doha. The souq is the traditional bazaar (marketplace) where one can find spices, carpets, traditional clothes, household items, jewelry, decorative items, and other goods. In our brief interaction, I learned that he sourced his products from different cities such as Mumbai and Lucknow in India. He continued by explaining that he chooses only the best products for his customers, and as a Muslim man, it is important for him to be true to his religious values and conduct his business with integrity and true to the ethics of Islam. This subtle interaction is a glimpse of one business interaction between cities in India and Doha. This interaction also illustrates how religious values seep into everyday life and inform one’s personal values, which drive professional activities.

The nuanced interplay between religion and culture is present not only in language, but also in law. Studying Islamic law at GU-Q allowed me to gain a deeper understanding of what is legally binding in Islam and what is normative. We studied the foundations of Islamic law; how the different legal and theological schools developed; the transformations of the law under colonialism; and how different colonial practices shaped the law differently, in say Egypt under the British and the French as compared to India under the British Raj. My learning was greatly enhanced by the rich class discussions which discussed not only court cases spanning family and property law, but also the questions which are of everyday importance. For example, how does secular law operate vis-à-vis Islamic law? How has culture affected the law? Studying in Qatar, a country in which Islamic law is practiced, brought me closer to the issues on the ground. I was able to ask questions about the things I have observed in Doha—all in all, tying together questions of religion, culture, and law. Reflecting on how religion impacts culture has made me more aware of the subtleties of both, and the intricate details which separate one from the other. 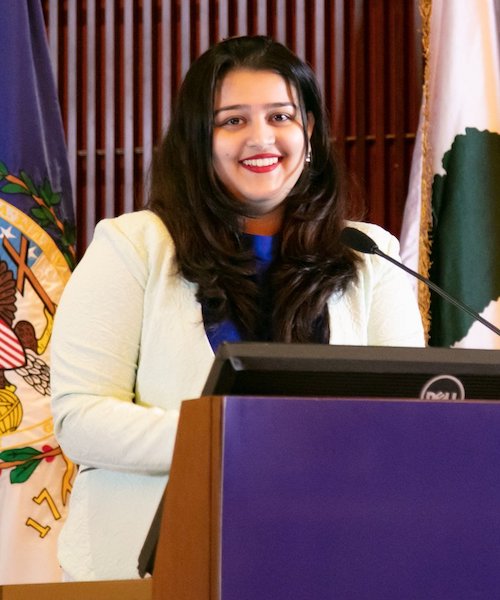 Khushboo Shah (SFS’22) is an undergraduate student at Georgetown University in Qatar and is majoring in international politics, with a minor in theology. Her research interests lie at the intersection of city-making, consumption politics, and political theology.