The Importance of Social Class in Ecuador

Before heading to Quito, an Ecuadorian friend warned me about the importance of social class, saying "It's a really big deal over there." Although I didn't pay much attention to it at the time, after being here for eight months, I realize that her statement certainly holds true. Though subtle, I hear class-related conversation almost every day.

Like the United States, social class influences several aspects of your life. Examples include neighborhood, appearance, education, and even your last name. However, unlike the United States, there is little social mobility. People born in the lower class will usually remain there for the rest of their lives, tending to give a sense of superiority to many members of Ecuador's upper class.

During Christmas dinner, a member of my host family revealed that she was pregnant. The entire family was excited, and immediately began suggesting baby names. After someone suggested a name, my host mom scrunched up her face in disapproval and replied "¡Suena como nombre de taxista!" or "Sounds like a taxi driver's name!" Everyone laughed. Apparently the thought of the baby, a member of Quito's upper-middle class, having a name fit for a "lowly" taxista was absurd and comical. These kinds of assertions are not extremely uncommon.

Although very few people directly state their aversion to being associated with the lower class, there are many behavioral indicators that suggest it. For example, an outing as simple as going to the pharmacy can denote one's social class. Most members of the upper class choose to shop at Fybeca, a high-end pharmacy, instead of Sana-Sana because of a perceived higher quality, although both stores are owned by the same company. Living in the northern sector of Quito instead of the south is usually more desirable, although southern Quito has nice neighborhoods. Owning a Blackberry or an iPhone is extremely attractive, although it easily costs double the price as in the United States and significantly raises one's odds of being robbed.

The most prestigious status symbol, however, is anything associated with gringos, or foreigners. There is a prevailing mentality that connects a foreign origin to better quality and social status. So much so, that the government enforces a high tax rate on imports to promote national products. Nevertheless, appreciation for gringo products is far from dwindling. American brands are highly sought after. A dinner at T.G.I. Friday's for example, is considered very prestigious and costs three times as much as the average Ecuadorian meal. Many national companies choose to use English names to create an association with foreign prestige in the minds of consumers.

Logically, being a gringo (from the United States or Europe) is the ultimate status symbol. This helps perpetuate the idea that white is superior, not only in Ecuador, but throughout Latin America. Having blonde hair and ojos gatitos, or light colored eyes, is covetable because in the minds of many, it indicates a higher socioeconomic standing. Once, while having a conversation with my host mom about the kind of man I would like to marry, she suggested that it would probably be better if I married a white gringo so my kids would turn out lighter.

Since colonial times when the Spanish ruled, a social pyramid with the whites on the top and indigenous and blacks at the bottom has prevailed in Ecuadorian society. For this reason, many people are surprised when they hear my English accent. How could a black girl be a gringa? How could she be a part of the perceived elite? I usually get replies such as "I thought you were from Esmeraldas," a coastal region of Ecuador with a largely black (and poor) population.

These realities of the social structure of Ecuador parallel greatly with those of the United States. Status symbols definitely exist, neither society's elite rarely want anything to do with the lower class, and the European standard of beauty dominates in both countries. I guess what disturbs me about Ecuador is the rate of change. The same prejudices from centuries ago still exist. Although the same can be said for the United States, we have made long strides in terms of social mobility and acceptance since those times. I do, however, foresee change in Ecuador's future. Although he sometimes uses communist tactics, the current president, for example, has made changes to advance social equality. There have also been several movements for the advancement of women, indigenous people, and blacks.

I guess I can say that through the inequalities, prejudice, and discrimination in Ecuadorian society, there is hope. But like the rest of the world, they've got a long way to go. 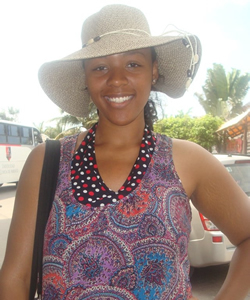 Kera Wright graduated from Georgetown's McDonough School of Business in 2013 with majors in international business and marketing, along with a minor in Spanish. She participated in the Berkley Center's Junior Year Abroad Network while studying in Quito, Ecuador during the 2011-2012 academic year.
comments powered by Disqus