The Meaning of Secularism in India

Throughout my time in Pune, the national news has followed several cases of Muslims being assaulted, and in some cases killed, after being accused of consuming beef. Eating beef in most states is illegal (as is assaulting another human being), but not much has been done to bring those who took the law in their own hands to justice.

India, like the United States, is a secular nation. This I learned in one context or another within all of my classes. India, unlike the United States, does not define secular as being separate from or without any religious or spiritual basis. That I had to figure out on my own. Under the constitution, all religions are treated as equal and protected from discrimination. Whereas I have grown up understanding that secular means the separation of church and state and therefore the separation of religion from politics, religion continues to play a key role within Indian politics in a way that sometimes negatively affects minority religious groups.

Historically, religion has played a key role in maintaining governments within India. Within ancient Hindu society, political consolidation was most effectively accomplished when paired with religious reinforcement. Many political conflicts within India were also religious wars, and the physical protection of both religious places and priests became a necessary task, and something provided by the state. This history is not unique to India, as many European nations have had a political system that is highly dependent on religion. What is unique is the role religion plays in politics today.

In the United States, religion is seen to not have a prominent place in politics today. Of course politicians make reference to their own personal beliefs and regular church attendance every so often, but overall it is widely agreed upon that to be a secular state is to exclude religion from politics. However, reference to religion is a regular occurrence in India, especially as the BJP (Bharatiya Janata Party, a historically Hindu nationalist party) is in power. India’s concept of secularism is to equalize all religions so that the state neither actively chooses, nor demonstrates through legislation, a preference or prejudice of one religion over others—a definition that in theory could work. We all know, however, that theory and practice are two very different things.

According to the most recent census (2011), India is currently approximately 80 percent Hindu, a huge religious majority whose beliefs are prominently reflected through legislative decisions, sometimes to the detriment of minority religious communities and particularly to the Muslim community. Laws such as the ban on the slaughter of cows, an animal that is considered to be holy within Hinduism, arguably elevate the beliefs of the Hindu faith over that of others. This particular law also negatively impacts those communities that earn their livelihood from beef and leather, a large portion of which belong to the Islamic faith.

India’s political platform has been a prime location for demonstrations of communalism, the systematic misuse of religion for political purposes, and the process of political construction of community identities along religious lines. Unfortunately, with the communalization of politics have been the outbreaks of communal violence in which the government has been unable to protect religious minority communities. There have been several cases of interreligious riots throughout India’s history. The 1984 anti-Sikh riots led to the death of nearly 3,000 Sikhs, but only 20 people were convicted in 25 years after the riots. In the Bombay riots of 1992, more than 1,000 people died, mostly Muslims, following the demolition of a mosque. The deaths of 59 Hindus in a train fire ignited the Gujarat riots of 2002, which led to the destruction of 20,000 Muslim homes and businesses and 360 places of worship. Approximately 1,000 people were killed and 150,000 people displaced. Of the 10,000 rioters, not a single arrest was made. And today following the death of a Muslim man, the police tested his meat (it was found to be mutton), rather than arrest any of the 200 in the mob that murdered him.

I do not believe that India is the only country to struggle in balancing religion and politics. Although legislative prejudice may not be as obvious in other countries, lack of outrage and inaction following discrimination of religious groups remains an issue. In the wake of the Paris bombings and, sadly, widespread Islamophobia, I think it’s important that not only India, but all nations, re-examine how their governments’ legislature and actions protect all religious communities. 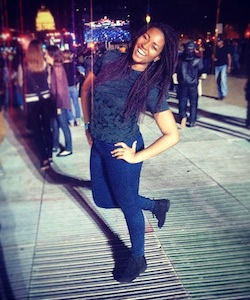 Shola Powell graduated from Georgetown College in 2017 with a double major in anthropology and French. During the fall 2015 semester she studied abroad in Pune, India and blogged for the Junior Year Abroad Network.