The National Language of Ireland, and the Irish Who Don't Speak It

There are quite a few things that surprised me when I moved to Dublin this September: stoplights seem to have a mind of their own, you don’t need to clear your own garbage away when you leave cafes, and wardrobes include a lot more Hollister and a lot more high heels than American wardrobes. One of the more serious surprises I’ve experienced is the use of the Irish language in Ireland. From the earliest stages of deciding to study abroad in Ireland, I had plans to study the language, but was not aware of the degree to which it is present even in Dublin, though I knew it was spoken infrequently across Ireland. Irish (what Americans often call “Gaelic”) is the national and first official language of Ireland, the second being English. All students in public schools learn the language from childhood until they go to university, and it is the language of the government, meaning that the Constitution and other official documents are in Irish as well as English. Irish and English translations appear on all signs in the city, as well as things such as public transportation and maps. However, unlike many aspects of the international tourist trap that is Dublin’s City Centre (promises of “FULL IRISH BREAKFAST” and “Live Irish Music Every Night!” are ubiquitous in my neighborhood), the presence of Irish for the most part does not seem to be another cleverly placed exaggeration of traditional Irish culture intended to tempt foreigners to spend more money. Instead, it is an intriguing aspect of Irish culture that I am trying to further understand.

I have not yet visited any Gaeltacht areas—designated Irish-speaking regions, mostly along the coast—so I’ve yet to really hear any Irish spoken outside of my Irish class. According to the most recent census, only about 2 percent of the Irish population speaks Irish on a daily basis outside of the educational system, and about 40 percent report being able to speak it at all. Irish students at University College Dublin (UCD), upon hearing that we international students are taking a beginning course in Irish, ask “Why?!” Those who had to study it in primary and secondary school leave school without much of a working knowledge of the language, and seem eager to leave it behind. Even one Irish boy I met from a Gaeltacht area said that he did not really speak Irish at home among his friends, but only with older relatives and neighbors. The teacher of my Irish course often mentions words that native Irish students pronounce wrong after years of study, suggesting an indifference to the language. Of course, these attitudes do not represent all or even many Irish citizens’ attitude to their national language, but it is a present and powerful attitude.

I don’t fully understand why it is that this native, centuries-old language is not a point of pride for more Irish. I wonder if there is any connection between modern use of the language and Ireland’s relationship with the United Kingdom. It was the colonizing British government that discouraged the use of Irish in favor of English, causing Irish to fall more and more out of use. It is puzzling to me that Irish independence in the early twentieth century did not bring with it a greater and lasting surge of interest in the native language, in an effort to redefine a national identity. I also wonder whether the overwhelming use of English is deemed necessary by the Irish in order to keep up in our rapidly changing and globalizing world. Ireland, though it has seen a slight economic recession after the boom of the Celtic Tiger, has stayed solidly at the forefront of Western culture in recent years, and remains a top vacation destination for English speakers and non-English speakers alike. Far from finding the Irish language to be useless, international students I have met find the language beautiful and worthy of study. Why is there not a greater inclination among Irish to study and use it, then? Is it in defiance of the romanticized idea of Ireland that many visitors have? I hope to uncover some answers to these questions and learn further implications of the role of the language in Ireland. Hopefully a visit to a Gaeltacht area will give me some insight, and by that time I should be able to exchange a few words in Irish with an Irish-speaking person! In the meantime, I will grill my Irish friends in Dublin on their opinion of the language. Until then, slán agat (Good-bye)! 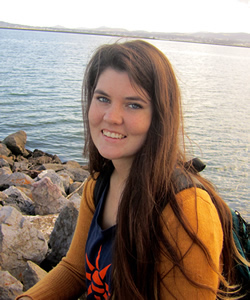 Fiona Meagher graduated from Georgetown in 2015 with a major in English and a minor in theology. She participated in the Berkley Center's Junior Year Abroad Network while studying in Dublin, Ireland during the fall semester of 2013.