The Politics of Language in a Former Colony 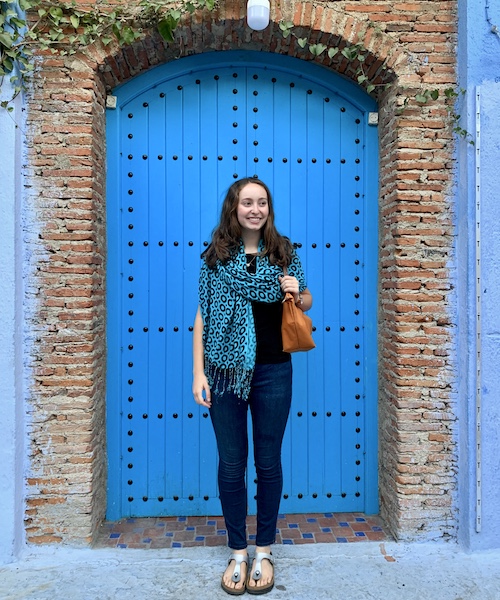 During the first few weeks of my semester abroad in Morocco, a French colony during the twentieth century, my go-to opener—to taxi drivers, waiters, new professors, and really any Moroccan I met—was “Bonjour, monsieur” or “Bonjour, madame.” I had known going into this semester that many Moroccans speak French, and it felt only natural, as I am half French and fluent in the language. From a practical standpoint, those opening lines mostly worked, meaning that locals usually understood me and replied “bonjour” right back.

Now, though, I consciously begin conversations with “salaam,” which is “hello” in Darija, the Moroccan dialect of Arabic and the primary spoken language here.

To back up a bit and provide some context, my fluency in French is part of the reason that I chose to study in Rabat, Morocco. Since the country was a French colony or protectorate for about 40 years during the 1900s, French is a common language. It’s featured on street signs, menus, and storefronts. It’s generally the language of business and government affairs, and it is taught in schools across most of the country. I learned that it is considered a “prestige language.”

It’s undeniable that my language skills have helped me have a much easier time navigating the country. Indeed, in my day-to-day life here, French is immensely helpful. I’ve been able to chat with shopkeepers, order meals in restaurants, make reservations at a local hammam, and ask for directions—particularly useful in the historic part of town with its narrow, crisscrossing streets. Thanks to shared language, I’ve also been able to have meaningful conversations about Islam, cultural differences, and French colonialism with host families and professors.

These material benefits, though, are weighed down with a history of colonialism and linguistic dominance. I’m grappling with what it means for me, as a French person, to be studying in Morocco in part with the goal of strengthening my French. Truthfully, I am rather ashamed to admit that I initially had little to no interest in learning Darija. That has now changed, as I finally see the now-obvious value in learning the local language. As I think about my reasons for coming here, philosophical questions of language come to mind: To what extent does the language of the colonizers still reference an ugly history that cannot be forgotten? Alternatively, can a language be apolitical, severed from its historical associations with power and privilege? Also, does the shared French language help various African nations communicate with each other? Or are these potential Francophone connections just weak, artificial links borne out of the history of colonialism?

I am learning that even Darija is a language laden with French cognates, remnants of the colonial era. In all honesty, my Darija class can feel like a challenge for me, so on the one hand, I am relieved each time I learn that the word for, say, “fork” is essentially just the French word fourchette. The fact that much of Darija is similar to a language I already speak makes the learning process much easier. But of course, I recognize that these similarities exist due to an uncomfortable past and should not be taken lightly.

These unanswered questions remain at the forefront of my mind. I don’t anticipate having any clear answers in the near future, although I am excited to continue learning about this country and reflecting on what it means for me to be here. As a short-term goal, I’ve noticed that when I push myself to have conversations in Darija—even just short, limited conversations, with some animated hand gestures for when my vocabulary fails me—these earnest efforts are greeted with smiles and laughter. My American accent doesn’t appear to matter that much; people here seem to truly appreciate when foreigners make an effort, however small it may be. In that spirit, I am excited to continue pursuing Darija to continue building meaningful relationships rooted in this Moroccan language. As they say in Arabic, inshallah (God willing)!