The most fascinating product of studying abroad is the discovery of different mentalities in a culture. Specifically, in Russia, society has completely different views of women and their expectations. As a foreigner, the best way to understand these ideas is to step away from those of the United States and explore these nuances through firsthand experience.

In my Russian conversation class, we discussed the idea of men being “the stronger sex” and how they relate to women. Interestingly, Russians do not refer to women as “the weaker sex”—nor do they think women are weak at all—but instead women are “the prettier sex.” As such, women do everything they can to live up to that idea. Whenever they are out in public, Russian women dress pristinely, always in high heels, regardless of the weather. Even now that it is starting to get colder and winter is settling in, women continue this custom with high heeled boots. It would be a social scandal to wear sweatpants or running shoes unless one is on their way to the gym.

In response to the gracious exterior display, men generally act in a way that Americans would describe as “gentleman-like.” They give up their seats on the metro, hold out a hand to help you off a bus, and hold doors open for women, even if they are strangers. As one of my professors pointed out, it is ingrained in their minds that if a woman is in their presence, they, as men, should be on their best, most polite behavior. While these ideas of chivalry have been discouraged in the United States—due in part to extreme feminism—the gender roles of men in Russia have nothing to do with the idea of women needing their help. On the contrary, men help women because they are women, i.e. “the prettier sex.”

When my conversation professor first brought this point up, I was confused at the simplicity of their mentality. What one needs to realize, though, is that many of the gender roles in Russia come down to ideas of love and marriage. The biggest moment in the life of a Russian is the day that they get married (followed closely by having children), because it revolves around the love that two people share. Russian women dress nicely to find a husband, while Russian men act chivalrously in order to find a wife.

The most shocking part of Russian gender roles for Americans is the idea that love always outweighs work. That means that the majority of Russian women devote their efforts to finding a husband, and then caring for their children. That is not to say that women don’t receive educations or have careers here, because they most certainly do. In general, though, most set aside their career until their children are grade school age, meaning that they leave behind a job they might have had prior to having a child. Russians prefer to care for their children without the help of a nanny, and the idea of preschool is a foreign concept. They are completely devoted to their family and the love within it.

From the outside, it is impossible to see these gender roles as anything but cultural differences. However, when one takes the time to discover the depth of the Russian mentality, all sorts of new ideas are found. Interestingly, it even made me question some of my customs from the United States, like why we value having a job over finding love. I appreciate the time to explore the Russian culture as well as my own and look forward to the future insights that my study abroad experience has to offer.

These gender roles are by no means an absolute, but more a general idea in Russian culture. 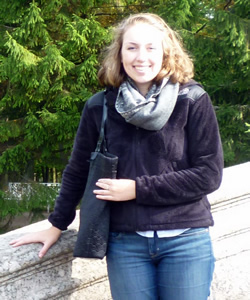 Alexandra Buck graduated from Georgetown in 2014 with a major in English and minors in linguistics and Russian. She wrote for the Berkley Center's Junior Year Abroad Network while studying in St. Petersburg, Russia during fall 2012.
comments powered by Disqus