The Price of Dinner in Buenos Aires 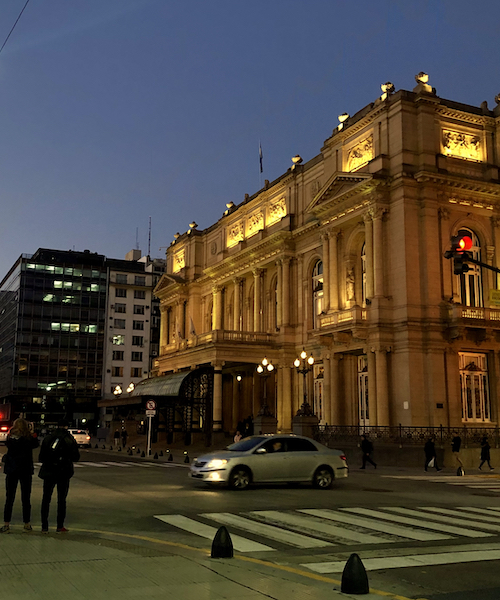 In terms of cultural experiences, my first two months in Buenos Aires have been no disappointment: My days have been filled with chatting about elections over steak dinners, enjoying afternoon meriendas (snacks) at cozy cafés, attending performances at the Teatro Colón, and browsing through art at outdoor markets. Almost more captivating than the experiences themselves, however, are the costs of my exploits. Empanadas at the store adjacent to my apartment put me down 35 Argentine pesos, about 60 American cents, while tickets to the orchestra round out to about five dollars.

The ability to buy lunch for three dollars hasn’t been typical for every American student in Buenos Aires over the past ten years. The Argentine economy is known for being unstable, and at the precipice of elections in October, it is decidedly so; high inflation rates over the past several months have effectively slashed prices for foreigners. My second week in the country, the Argentine peso devalued even further due to economic uncertainty over the results of the primary elections, which showed populist candidate Alberto Fernández beating out incumbent Mauricio Macri by a landslide. At dinner that night, my host family somberly discussed the state of the economy, arguing over whether or not Macri can save his campaign in the midst of a recession that is making daily expenses stressful for the lower-middle class. “At least the exchange rate is good for Lizzy,” my host sister jokes, and everyone gives a halfhearted laugh. “What province are you going to buy?” my host brother adds, grinning down at his plate. “I’ve heard Mendoza is nice.”

Living in the midst of the recent Argentine recession as a “rich” American is a strange position to be in, especially because my family isn’t especially wealthy by American standards, often leaving me to contemplate the economic privilege that exchange students possess. This is not to say that studying abroad is not a financial strain on many families; for plenty of students, the costs prevent them from going at all. Once students get to their study abroad location, however, money often becomes an afterthought. Typically living with upper-middle class host families, students dip their toes into the cultural waters of their destination country in the name of cross-cultural exchange—eating local food, learning the language, and maybe chatting about politics—but are rarely forced to confront the poverty or systemic issues that exist in their new home.

It’s certainly true that you don’t need to experience something to understand it, and forcing students to live with lower-class families would likely present a host of other difficulties. But learning about the current economic situation of a country certainly needs to be a part of any meaningful cultural immersion. It’s easy to romanticize our lives here as exchange students, with 50 cent subway rides and nights out that leave a relatively small dent in our pockets, and there is undoubtedly value in sharing in another nation’s food, music, language, and other cultural traditions. Ultimately, however, we are guests in another society’s economic reality. We discuss the fascinating economic developments over dinner, rarely stopping to think what the exchange rate really means for the lives of locals and never worrying that we might be unable to pay the bill. Perhaps an important aspect of cultural exchange goes beyond enjoying steak and empanadas; maybe we also need to understand the cost of the meal.