The Road from Pittsburgh to Jerusalem 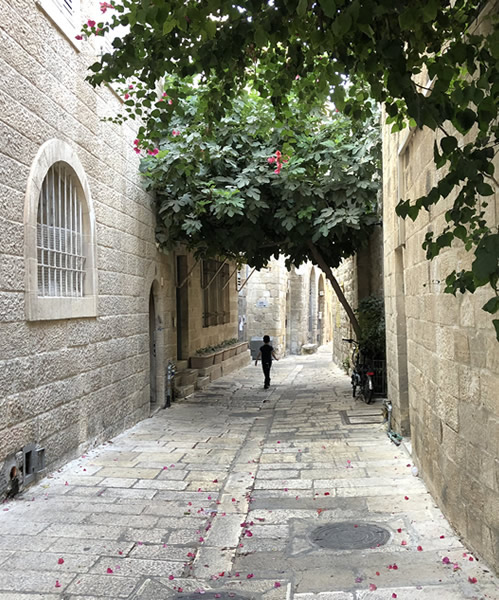 On the way home from a trip to Ramallah last Saturday, I got a New York Times alert on my phone. The alert informed me of the mass shooting at the Tree of Life Synagogue in Pittsburgh. I opened up the article despite my best instincts to shut my phone off. The words “Death to the Jews” sprung off the page. As I looked around the crowded bus, I shut my phone. I was not in a physical nor mental space to mourn. In the next couple of days, I cut myself off from social media and the news entirely. I thought back to Vegas, and further to Sandy Hook, and remembered how I had sunk down into a hole of news coverage, reading article after article with tears running down my face. Now it was personal. Now, it was my Jewish community that was having vigils. Now it was all the anti-Semitic hate I had learned about in my courses coming true in the heart of the country that I love. I couldn’t erase from my mind the fact that my mother had gone to temple that night.

So I avoided. I hugged my roommates and called my parents but spoke of the shooting in a removed way. I felt numb to violence as a member of a generation that has grown up in this age of mass killings. I did not and still have not fully addressed the impact this crime will have on Jewish life in America. I wondered whether there would be armed guards the next time I went to synagogue, but as these questions entered my mind I did not let them penetrate my heart. Israel did not feel like the right space to process the violence. This response may seem bizarre as Theodore Herzl proscribed the Jewish state, where I am currently living, as the answer to anti-Semitism. Here in Israel, I'm not the minority and I don't have to explain myself—I'm safe. A local rabbi told me that Pittsburgh was tragic, but this time is different from when we have experienced anti-Semitism before because now the Jewish people have Eretz Israel (the land of Israel). Now, we can put on the uniform of an Israel Defense Forces soldier and defend ourselves. Judaism, the rabbi explained, is not a pacifist religion.

Suddenly, something that I had been thinking about since my arrival Israel materialized in my brain with full clarity. Israel is a crazy and beautiful country but it is not my home. I have been searching to find in this place something like a magnet that can help me understand the unbelievable draw to the land that many feel. I was looking to find here the connection that seems to link me to the Holocaust and to the anti-Semitism around the world as tragedies that feel distinctly personal to me. I have reached out and come up empty. This emptiness only felt amplified as I was told that a way to understand Pittsburgh was to take solace in the existence of Israel. I see that existence as something unquestionable and something with inherent value, just not for me in particular. I do not want to come to Israel to escape anti-Semitism. I do not want to put on a Jewish uniform and fight for the Israel Defense Forces because I seriously question much of what they do. I want my home to be safe from hate. I want to go to synagogue without armed guards outside. I want to feel like my family is safe from anti-Semitism in all its forms with a mezuzah outside our doors. Israel will not give me that. So, Israel doesn’t help me or give me solace.

Instead I worry that this latest shooting will become political bait for the groups that see questioning the Israeli government as an expression of anti-Semitism. Anti-Semitism is alive and well in the United States. We must be sure to protect this country of Israel that has given me a temporary home for the past three months. These two statements are sometimes interconnected, like when a protest against the Israeli government is expressed through swastikas. But I want to be careful, because the American Jewish community is something distinct, something I want to protect, and something Israel won’t be able to fix.