The Roma People and the Italians: A Strained Relationship

If you are studying abroad in Florence, or another major city in Europe, I would be willing to bet that you have been warned about being pickpocketed in crowded areas and at major tourist attractions. In fact, the term “gypsy” is probably what these pickpocketers are referred to as. In Florence, these “gypsies” can usually be found in front of the Duomo or other major churches downtown, and they are usually begging for spare change.

The proper term for these people, however, is not gypsy, but Roma. The Roma people have a large presence in Italy, with an estimated population of 150,000, and the relations between the Italians and the Roma are very strained. While both the Italian government and the Roma people themselves are to blame for the terrible living standard and conditions of the Roma people, the answer to the issue lies in the acceptance of the Italian people to support this unique ethnic group.

Roma people have their origins in northern India and have some have ancestors that have lived in Europe as far back as the fifteenth century. With the addition of Eastern European states such as Romania into the European Union, Italy has seen an influx of Roma people in the past decade. The attitude towards the Roma people is for the most part hostile, accusing them of opting for crime over a legitimate job and isolating themselves from Italian society (and taxes) by living in illegal camps. One survey in 2008 found that 68 percent of people in Italy wanted all Roma expelled from the country.

Politically, not much has been done in order to better the lives of the Roma in Italy. It is quite certainly political suicide to openly support the Roma people, or the zingari, the Italian term for gypsies. Lower and middle class Italian people, who are already critical of the amount of welfare and help they receive from the state, would never support spending taxpayers' money on the Roma people. Frequently, the government never spends money that is allocated for the construction of shelters for the Roma, or that money is siphoned off to another project. The Berlusconi administration proposed measures to fingerprint all gypsies in order to be able to better identify them and fight crime across Italy, a proposition met with harsh opposition from advocate groups, calling the actions racist and profiling.

Government officials also take unnecessary actions against the Roma people to purposefully cause hardships for them. According to my government professor, Dr. Deborah Spini, police officers have been known to confiscate blankets from gypsies in the middle of the winter. While the Roma people are known to engage in criminal activity, and even if some are illegally in Italy, there is no need to confiscate blankets from homeless people in the winter. The government of Florence also ordered a bulldozing of a gypsy encampment on January 15 of last year. In the opinion of Dr. Spini, these actions were done with malice simply to displace the Roma people. She took it upon herself, along with other parishioners of her church, to house many of these people in the church at nighttime to spare them the cold of the nights.

While the Italian government has not done much to help the Roma people, they certainly have not done much to help themselves. It is true that many gypsies roam the streets looking to pickpocket unknowing tourists and civilians, which endears them to no one. Roma people have a culture of male superiority, which not only looks bad to outsiders but also actually keeps them from advancing their status in society. It is very common for the Roma people to wed as teenagers and have multiple children, which is an economic strain on people that have very few ways of earning a legitimate living. This is why many zingari resort to a life of crime, so they are able to support their young and growing family. Roma people are very distrustful of the government, for good reason, but they are distrustful to the point of crippling themselves.

The real answer to this problem lies in rectifying the combination of the male superiority within the Roma culture and the government’s abuse of these people. The money that is allocated for the Roma needs to be spent on them, not siphoned off to other projects. It needs to be spent, however, on educating the women of the Roma people. Studies have shown that education is much more of an effective method of decreasing the birthrate among cultures than contraceptives are. If the Roma women were afforded an education, the birthrate decrease, the inequality among their own people would begin to disappear, and their families could start later and not have to resort to lives of crime.

The education of women, however, is a difficult issue to begin working on. There has to be a complete change of perspective towards women in their own society, and a change in opinion towards the Roma by the Italians and their government. It is time for the Italian people to assume responsibility for their mistreatment of the Roma people and work to improve their standard of living in their country, and it is time for the Roma people to push themselves towards better lives. 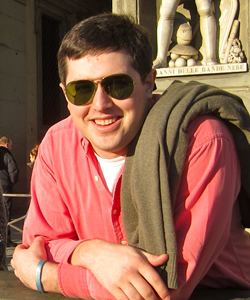 Luke Devlin graduated from Georgetown College in 2013. He participated in the Berkley Center's Junior Year Abroad Network while studying in Florence, Italy during the spring semester of 2012.
comments powered by Disqus