The Truth About Gender Equality in Cuba

By the numbers, Cuba appears to have made great strides toward gender equality. It’s ranked third in the world in terms of most female representation in the country’s main governing body with a Congress that is 49 percent female. For perspective, the United States is ranked seventy-sixth on that same list, our Congress being only about 20 percent female. Women are educated in impressive numbers (largely thanks to the revolution’s commitment to free, universal education) and are well represented in important fields as professors, doctors, economists, etc. Obviously, however, the official statistics don’t tell the whole story.

Despite the changes that occurred officially after the revolution in regards to gender, the culture of machismo, so common in many Latin American countries, is very much alive and well. For example, women are the ones expected to keep house and cook meals. Even if she has a full-time job as a doctor in which she spends all day at the hospital, she is still expected to maintain a clean home (especially difficult because it has to be done without many of the modern tools that we use in the United States), do laundry (oftentimes without even a washing machine), cook good meals (which requires trips to multiple different markets to obtain the required ingredients), and, if necessary, care for the children. At the same time that the woman is doing this, men are allowed to relax and enjoy a beer with their friends. As far as power dynamics go, the machismo mentality ensures that men receive the upper hand. All you have to do is walk down the street to see machismo at work. Catcalls, or piropos, and other forms of (non-physical) sexual harassment are unavoidable for women, even on a five-minute walk. This culture of machismo is deeply embedded in Cuban society and indicative of deeper, institutionalized gender inequalities as well.

In actuality, employed women in Cuba do not hold positions of power—either political or monetary. The Cuban Congress, although elected by the people, is not the political body that truly calls the shots. The Cuban Communist Party—only about 7 percent of which is made up of women—holds true political power. Markedly, the systems of evaluating gender equality in other countries around the world aren’t universally applicable, as women are much less represented in the true governing body of Cuba than we are led to believe. In addition, the professions that are usually synonymous with monetary wealth and the power and access that come with it (doctors, professors, etc.) do not yield the same financial reward here. Doctors and professors are technically state-employed and, therefore, earn the standard state wage of about $30 per month. This means women employed in these traditionally high-paying fields are denied access to even monetary power as a form of establishing more of an equal footing with men. Evidently, in Cuba, women can be well employed but not where it matters.

Furthermore, Cuba has begun shifting toward a more privatized economy with the tourism leading the way. More and more Cubans are leaving state employment in search of jobs in the tourism industry, which are far more lucrative with access to wealthy foreigners and their subsequent tips. Many professors and doctors are leaving their jobs to drive taxis or become bartenders, a strange notion by US standards but all too common in Cuba. As a result, internalized sexism and machismo have led to the employment of more men over women in these new higher-paying jobs, thereby giving men access to greater financial power. If women are hired, it is often as a maid or cook, or a similar job that reinforces the traditional gender roles that they already struggle against. Although the private sector offers women some opportunity to start their own business (usually a restaurant), few are able to take advantage without access to the capital necessary to do so. So, even in this new economy, women are being left behind.

Unlike what is claimed by the Cuban government, gender equality is a long way off in Cuba. Unfortunately, most Cubans (including Cuban women) do not believe sexism exists because they grow up hearing that it was eradicated by the revolution. Awareness of the problem is always the first step to solving it, and without that awareness of the deep-lying sexism in Cuban society, there can and will be no push for change. However, with all the change happening in Cuba in recent years, anything is possible. 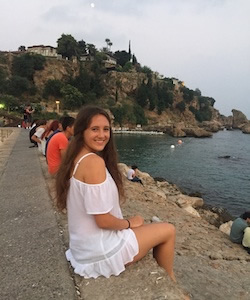 Nicole "Nikki" Wadley graduated from  Georgetown College in 2017 with a major in history and concentrations in the Latin American and European regions. She studied in Havana, Cuba during the fall 2015 semester and blogged for the Junior Year Abroad Network. She enjoyed exploring the thoughts of the Cuban people as relations continue to thaw between their country and the United States.