The Violence of Cambodia's Past Threatens Educational Dreams Today 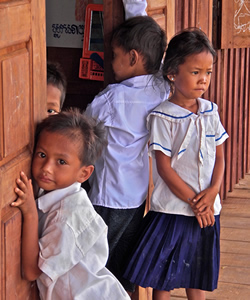 Visualize a scene of unimaginable brutality and grief—a vast and sprawling field riddled with bone fragments and rotting teeth, with blood splattered on trees and a torturing stench filling your every breath. This troubling scene is not from a horror fantasy. This is an image of a typical “killing field,” like the hundreds spread throughout rural Cambodia. These fields immortalize the atrocity of the 1975-1978 genocide by the Khmer Rouge regime against the people of Cambodia. Killing over 25% of the population, the Cambodian dictator Pol Pot and his Khmer Rouge following perpetrated one of the most massive and devastating genocides in history. Although over 30 years have passed since the Khmer Rouge’s fall from power, new human remains continue to surface in the many killing fields. This, however, is not the only tangible evidence of the genocide’s destruction.
In fact, the memories of and repercussions from the Cambodian genocide continue to impede the education system in the country today. Just as the bones of Pol Pot’s victims rest exposed in massive killing fields, the children of Cambodia remain unprotected by their government as many are denied the basic human right to fundamental education. Spending three weeks in Battambang researching the public education system illuminated the staying power of terror, especially in a developing nation such as Cambodia. Despite the efforts of thousands of education-oriented foreign NGOs, the progress of education development since the 1980s has been insufficient. Such inadequacies are caused in large part by three toxic factors: a distrust in the Cambodian government, the Khmer Rouge’s crusade against the educated class, and Cambodia’s struggling agrarian economy.

Firstly, survivors of the 1975-1978 genocide have seen their government turn against its own people in the past and have developed an intense distrust of those in power. When I asked about Cambodia’s upcoming July presidential elections, most of my subjects sighed and declared, “nothing will change. We will continue to suffer.” Furthermore, an appreciation of the importance of childhood education was simultaneously destroyed with the murder of Cambodia’s educated class. Threatened by their knowledge, Pol Pot’s regime crusaded against all intellectuals, professors, businesspeople, and college-educated citizens. With the demise of the most educated echelon in Cambodia came a societal disinterest in childhood education. Lastly, with a primarily agrarian economy based largely on rice production, most Cambodian children are forced to work in their families’ rice fields at a young age rather than attend daily school.

The striking shortcomings of Cambodia’s public education system are illuminated when comparing the small country to its Western neighbor, Thailand. Thailand maintains an adult literacy level of 94% while Cambodia falls short at only 77%. Furthermore, while Thai children benefit from accessible secondary and higher education institutions both in the city and in rural areas, only 2% of Cambodian villages have a secondary school accessible to their children. As one Thai teacher working in Cambodia explained, “In Thailand the children have dreams to go to university, and many of them do. In Cambodia, the children are not allowed to dream like this. This dream is unheard of.” At one point comparable in terms of social and economic development, the genocide has set Cambodia far behind Thailand and many of its other Asian neighbors.

With a lack of trust in government-sponsored schools and a collective encouragement to abandon dreams of college for a life in the rice fields, Cambodian children face insurmountable challenges. Unfortunately, this sad truth is the price they pay for their country’s tragic history. In such a picturesque country with such beautiful people, darkness still looms. Each day, new human remains continue to surface just as each day new children leave the classroom for a life of hard manual labor. The effects of Pol Pot’s regime are as present as ever.