Mass ended at around 8:40 a.m. on Sunday morning, and I walked back to my host family’s house for breakfast. The morning news showed pictures of a stormed United States embassy in Libya, informed of protests all over the Middle East because of a video entitled "The Innocence of Muslims," and offered their condolences for the loss of 50 lives at a Nigerian church that was targeted by the terrorist group Boko Haram.

Even though the country in which I currently reside has an overwhelming Muslim majority, even greater than that of some of the nations mentioned in the news journal, I feel completely safe and welcome walking down the city streets, going to Mass, and talking with everyone about my beliefs. In fact, my original plan was to go to Vigil Mass on Saturday afternoon, but because I decided to stroll by the mosque, I ran into the very hospitable Imam Sheriff and did not make it.

My conversation with the imam lasted a couple of hours as he talked with me about the peaceful coexistence that Christians and Muslims enjoy in Senegal. We were cut short because the time for him to call the faithful of Dakar to prayer had come. Since it is predominantly Muslim, Dakar is summoned to pray five times a day from atop minarets all over the city. However, there is a great mystery behind this particular scenery.

Senegal is surrounded by what is commonly referred to as the "belt of fire": a set of neighboring countries that for religious or political reasons are unstable, such as the case of Mali and Guinea-Conakry. However, here we profit from what is often called the Senegalese exception: political stability and peaceful social interactions. Thus, the natural question would be to ask what makes Senegal different from other West African states. In my opinion there are several factors that distinguish Senegal, the most important being religious homogeneity, racial equality, and a tradition of peaceful political transitions.

A great emphasis is placed on religion in Senegalese culture. Even though there is no sort extremist religious movement and religious diversity is a part society, everyone must be a believer, be it Christian, Muslim, or any other denomination. One must have beliefs and practice a religion; atheism is not socially accepted. Furthermore, most Senegalese Muslims are Sunni and follow the Sufi religious tradition as organized in religious brotherhoods.

Sufi tradition is one of external peace, which focuses the individual on what the Prophet Mohammed called the greater jihad, that is to say the struggle within each of us as human beings, the struggle against sin and temptation. Thus, a tradition that emphasizes belief in the One God and internal reflection, brings forth another branch of power, that of the religious leaders at a national level. The caliphs of the respective Sufi brotherhoods and even the cardinal of the 5 percent Catholic population take strong stances in the national arena when needed and keep a check on politicians.

Another factor that contributes to the exceptionally peaceful nation of Senegal is racial equality. Even though Senegal has a diverse set of ethnic groups that co-exist peacefully, everyone here is sub-Saharan and dark-skinned. Thus, in Senegal we do not experience the racial tensions of Mauritania where the dark-skinned population is enslaved by the dominant moors who have their ethnic roots in northern Africa. Similarly, we do not have the contrary tensions such as those felt in Mali by the Berber and north Saharan populations of the northern Azawad region, who today seek independence on religious and political grounds from the distinctly sub-Saharan government in Bamako.

Finally, Senegal’s exception can be attributed to its tradition of higher politics, which is comparable to that of many European states. Léopold Sédar Senghor, Senegal’s first president, was a great intellectual, and not only did he work to establish a solid democratic foundation, but unlike other West African heads of state in the post-colonial era he voluntarily stepped down after 20 years in power.

Since then Senegal has had free elections, has experienced three peaceful power transitions, and has not yet seen a coup d’état. It is indeed a great honor to be in Dakar, the westernmost tip of Africa, in the country of teranga (the Senegalese spirit of acceptance, hospitality, and camaraderie). I look forward to the coming months and to more great memories here in Senegal. 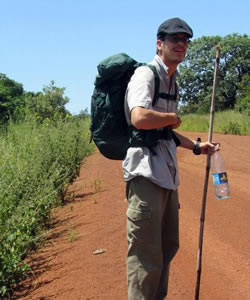 Glenn Ojeda graduated from Georgetown's School of Foreign Service in 2014 with a degree in culture and politics. He participated in the Berkley Center's Junior Year Abroad Network while studying in Dakar, Senegal during the 2012-2013 academic year.
comments powered by Disqus