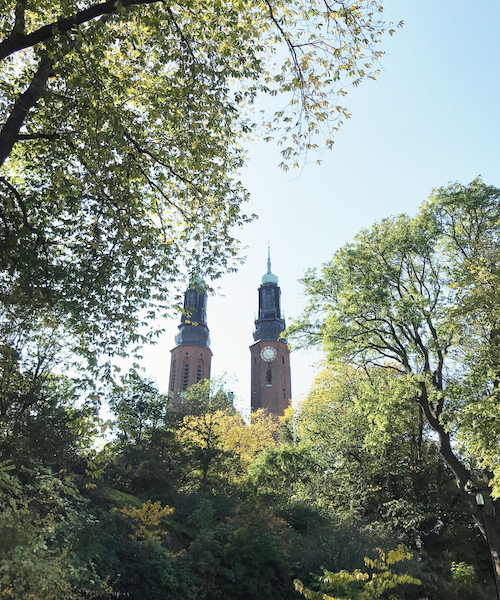 At the very beginning of the semester, the residential advisors for my building in southern Stockholm took us for a short tour around our neighborhood. On our walk, Matias, one of the advisors, pointed out the gym, coffee shops, his favorite pizza place around the corner from our building, and some nearby landmarks: a rocky overlook to the city skyline and some large, popular parks. What was missing from his introduction to the neighborhood was glaringly obvious to me. As you leave the front gates of my apartment, situated in the same compound as a retirement home and housing for workers at an up-and-coming tech firm, there stands a tall and elegant church. I remember the way I felt on my first day in Stockholm. Balancing many pieces of luggage and feeling rather sleep deprived, I saw the church on my way into the apartment and remember thinking, “I’ll have to go to that church before I leave—it must be important because it is so beautiful. How lucky am I to have this church right outside my dorm?”

On the first day of class, I went on a walk with a fellow Georgetown student in the neighborhood where our school is situated in the center of the city. We stopped outside a large brick-clad church and sat for a while, trading arrival stories. I still remember that afternoon because it was when the actuality of my residence in this city became very real to me. Sitting there, looking over the street, and talking to a good friend, I felt that I was really living here in Stockholm, not just visiting for a few days. My memory, however, was not painted by the church in the background.

When I think of travelling in Europe, I think about climbing church towers and passing by wonderful buildings with poignant religious meaning. In Stockholm, there are endless beautiful churches, but I have yet to climb a church tower or learn about the history of any church to speak of besides the chapel inside the royal palace.

Visiting the Royal Chapel, I was overwhelmed with its grand display of power and religion. The ceiling was ornate with gilded flowers and beautiful paintings, and well-polished organ sat atop the door at the back of the room. There were very few people walking into this part of the palace with me. As I entered, the room was silent and eerie. While a few people stopped to sit in the wooden pews that lined the floor of the room, most walked in, looked up, spun around, and walked out. This is typically my routine in a church as someone who does not affiliate with Christianity. However, I know how my grandparents like to visit churches, and theirs is a practice involving quite a bit more inspection and marveling than anything I saw from those visiting the chapel that day.

Sweden is one of the most secular countries in the world. This is something I have learned both in the classroom and on a very practical level. The hidden nature of the church in Stockholm is a prominent symbol for its position in the country in general.

During my week off from classes, I traveled to Italy and spent time in Bologna and Venice. After spending one week in Italy, I had managed to enter more churches than I had in my entire life. Walking the streets of both of these cities, I found myself gravitating towards the open doors of churches that lined streets full of tourists. Inside the churches that I visited, I found myself among many other visitors, most of whom stopped and sat, prayed, or stared longingly at the alters. While the churches were still decorated with ornate statues and frescos, I noted the difference between these Italian visitors and those whom I saw in Sweden. The visitors in Italy actively participated in the value and meaning of the churches they visited. While in Sweden the Royal Chapel was as much a place of worship as any of these churches in Italy, it seemed that the visitors treated it more like a museum than a spiritual home. Religion, of course, is not the same for everyone in one country and each family or individual has their own approach to practicing religion or not. However, I have observed religion in the Swedish cultural landscape as more of an artifact of the past viewed with an element of psychological distance than anything in which Swedes find refuge.