Where Everything is Possible, but Nothing is Easy 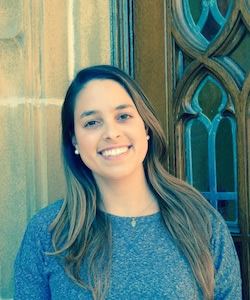 “How are you today, sunshine?” asked the assistant program coordinator, who usually uses "sunshine" when he forgets your name.

“Well, I got stuck in traffic for two hours and was late on my first day at work, had to walk 45 minutes in -17 degrees Celsius, mispronounced my order and got some unrecognizable meat at lunch, almost got run over by a rickshaw, and forgot my air filtration mask so probably lost a couple hours of my life just breathing today’s pollution… I just don’t understand why every little thing has to be a challenge.”

“Isn’t that why you came here?”

It’s been less than three weeks since I arrived in Beijing’s airport, but I already sampled all the jiaozi (dumplings) restaurants and figured out my study routine, the ladies at the cafeteria know me by my (Chinese) name, I mastered the art of kuaizi (chopsticks), and I understand bits and pieces of Chinese conversations in my office. However, challenges are abundant in the city that never sleeps, and I am constantly reminded of the words of one of my favorite Chinese professors: “Everything is possible in China, but nothing is easy.” This simple statement is the exact reason I decided to return to Beijing for a semester after spending my summer here.

Living in Beijing makes you feel small, especially coming from Israel (whose entire population is the size of a Chinese neighborhood). Beijing’s population is currently 22 million people, and is the eighth most populated city in the world, a fact I am constantly reminded of everyday when I commute to my internship. In any city with such high population density, resources are scarce, and the competition is tough. Whether it is a seat on the subway, an apartment, or a job post-graduation, the demand is much higher than the supply. For years the Chinese government has tried to prevent the city from reaching its capacity by setting a quota on residential permits, but the increasing demand for skilled workers made it increasingly difficult.

The attempts to attract rural migrants to non-central cities resulted in ghost cities. In complete juxtaposition to Beijing where rent is skyrocketing, there are around 30 million vacant apartments in the outskirts with no sign of buyers. This might seem unreasonable at first, but according to the government’s plans, 100 million rural Chinese will urbanize in the next five years, and these cities are crucial to enable efficient massive migration. In order to discourage rural migration to already congested cities, officials deny social benefits to children of migrants and prevent their enrollment in local public schools. This creates a situation in which migrants are forced to leave their children at home (also referred to as “economic orphans”), and breaking the traditional role of family in Chinese society.

Aside from the social price paid for its reforms, environmental issues are also highly debated. Air quality and water safety were my main concerns before coming here, and even though the smog is not as apocalyptic as portrayed by foreign media, I cannot say it is an ideal situation. Industrial coal-fired power plants, extensive car use, endless construction, and overall lack of law enforcement caused air pollution to reach levels that are more than 10 times those considered safe by Western organizations. The short-term solutions—such as shutting off factories during days with heavy pollution—are far from sustainable, but there are signs of slight improvement in the recent two to three years. China is supposed to peak its carbon emissions by 2030, but with the recent slowdown in its economy, many things might change as it re-adjusts its targets for the few years.

As for my targets for this semester, I hope to learn as much as possible and reveal the stories behind the dry statistic. China has done the impossible, but it was far from easy, and I am fortunate to be here in a time that will be remembered for generations to come and formulate my own opinion.