The gender structure of every culture and nation is different. Within every tradition, men and women interact in a cultural structure that defines their respective social and political roles. Compared to women in other developing countries, Thai women are generally viewed as having both a relatively favorable status and a high degree of autonomy. In fact, Thailand is a matrilineal and matrilocal society.

But even though Thai women may have social and cultural advantages in the community, they are also burdened with cultural obligations to their parents. Moreover, the changing economic relationships of a developing Thailand have increasingly altered gender relations and traditional customs.

Women have quite a unique position in rural Thai society. Although authority typically still rests with a senior male, families in rural areas are traditionally organized around female members, and the authority is passed down through the female line. Women also play an important role in household management, and some are even in local leadership positions.

Within the family structure, daughters are generally preferred over sons. Women also receive an advantage in terms of property rights in northeastern Thailand, as each daughter inherits part of the family’s land, while sons inherit mobile capital like buffaloes and cattle. Women have the freedom to choose their own spouse, and a man must be respectful to his future wife and her family. A man also pays a bride price for his future wife as a means of compensating for the inheritance he receives through marriage. After marriage, the couple moves in with the wife’s parents; in this way, mothers and daughters are able to maintain a continuous relationship with each other, thereby strengthening matrilineal kinship.

The advantages, however, aren’t without their cultural conditions and obligations. In Thai society, there is a very strong notion of bunkhun, “practical and moral indebtedness,” for both sons and daughters. But parents' expectations for their daughters are much higher than for their sons.

Sons and daughters typically fulfill their duties with different methods. For example, a son can gain merit from his parents by joining the monkhood, but a daughter usually must fulfill bunkhun through economic means. From a young age, adolescent girls are given much more responsibility, while boys are allowed more freedom and are given fewer responsibilities.

After marriage, a wife must continue to support the parents and siblings until the rest of the children are married. In many cases, women must leave the village and work in the city as low-paid domestic or factory workers in order to send money back home. Women are generally discouraged from asking for money from their family, while also carrying greater expectations to send money back home.

Furthermore, the pressures that come from Thailand’s economic development have strongly affected women’s roles in society. Smaller family landholdings, coupled with the twofold demand for education and higher-paying jobs, have changed how men and women fit into the family structure. Women are often the ones who face the greatest disadvantages, as existing sources of female social power are rapidly dwindling in rural communities.

Some families now practice bilateral inheritance, in which sons and daughters get equal inheritance in both land and moveable property. Parents are also starting to pass down inheritance in forms that are more intangible than land, such as education and healthcare. Therefore, women who work outside of villages are losing the matrilineal kinship ties that would normally support them. At the same time, they continue to be held to the same economic and social obligations as before.

Northeastern Thai women live in one of the world’s few matrilineal societies, which provides them with more opportunities for social participation. Property rights that are passed down to the daughter ensure that women have the resources necessary to support their parents and children. But with greater pressure to provide economically for the family, women are forced to find a balance between their simultaneous roles as both breadwinners and caregivers.

Although women in matrilineal cultures have traditionally received the benefit of property rights, this advantage is offset by the unequal filial burdens that they must bear. As economic development leads to decreased resource availability, increased desire for education, and shifting economic relationships, Thai women find themselves in a situation where they must constantly negotiate their social and cultural status. 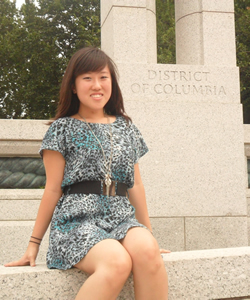 Mary Lim graduated from Georgetown's School of Foreign Service in 2013 with a degree in science, technology, and international affairs. She participated in the Berkley Center's Junior Year Abroad while studying in Thailand during the fall semester of 2011.