The Catholic Church and Nuclear Disarmament

It will not surprise anyone that Pope Francis has warned of nuclear catastrophe. In connection with the Vienna Conference on the Humanitarian Impact of Nuclear Weapons in December 2014, Pope Francis declared plainly, “The humanitarian consequences of nuclear weapons are predictable and planetary.” He went on to call for nuclear weapons to be “banned once and for all, to the benefit of our common home.”


What may surprise casual observers is that the Pope’s vision of a world without nuclear weapons is not new. In 1963, Saint John XXIII wrote in his encyclical, Pacem in Terris: “Nuclear weapons must be banned. A general agreement must be reached on a suitable disarmament program, with an effective system of mutual control.”

The Church’s profound concern for nuclear armaments was reinforced by Blessed Paul VI, Saint John Paul II, and Pope Benedict XVI. In his 2006 World Day of Peace Message, Pope Emeritus Benedict had a particularly poignant passage: “What can be said, too, about those governments which count on nuclear arms as a means of ensuring the security of their countries? Along with countless persons of good will, one can state that this point of view is not only baneful but also completely fallacious. In a nuclear war there would be no victors, only victims.”

What motivates the Church’s engagement in the nuclear question? The answer is at once simple and profound. The Gospel requires the Church’s teachers to defend human life and dignity. In an April 2010 letter to President Barack Obama, the late Cardinal Francis George, O.M.I., then president of the U.S. Conference of Catholic Bishops, wrote: “The horribly destructive capacity of nuclear arms makes them disproportionate and indiscriminate weapons that endanger human life and dignity like no other armaments. Their use as a weapon of war is rejected in Church teaching based on just war norms.”

The Church is careful to stay in its own lane in public debates over nuclear nonproliferation and disarmament. Church teachers do not possess military and technological expertise, but they can provide moral guidance. In that same April 2010 letter Cardinal George admitted, “We are pastors and teachers, not technical experts. We cannot map out the precise route to the goal of eliminating nuclear weapons, but we can offer moral direction and encouragement…Although we cannot anticipate every step on the path humanity must walk, we can point with moral clarity to a destination that moves beyond deterrence to a world free of the nuclear threat.”

Despite the fact that the Catholic Church has a longstanding goal of pursuing a world without nuclear weapons, this is not to say that there has been no development in the Church’s moral analysis. It is fair to say that the 1983 judgment of the U.S. bishops in The Challenge of Peace on nuclear deterrence, a judgment they made citing Saint John Paul II, is undergoing development in light of current circumstances.

Even in 1983, the “strictly conditioned moral acceptance of nuclear deterrence” was not considered “adequate as a long-term basis for peace.” Such deterrence was morally acceptable only as “a step on the way toward progressive disarmament.” At the time, the bishops called for ongoing evaluation of deterrence policy in light of the goal of a world without nuclear weapons.

In more recent years, the Holy See’s permanent observer to the United Nations, Archbishop Bernardito Auza, has articulated a shift in the moral evaluation of nuclear deterrence: “Today there is no more argument, not even the argument of deterrence used during the Cold War, that could ‘minimally morally justify’ the possession of nuclear weapons. The ‘peace of a sort’ that is supposed to justify nuclear deterrence is specious and illusory” (April 2015).

Nuclear deterrence is increasingly seen as an excuse for the permanent possession of nuclear arsenals that threaten humanity’s future. Most of the nuclear powers have embarked on incredibly expensive programs of “modernization” of their nuclear arsenals, hardly an encouraging sign of moving toward disarmament. The dire specter of miscalculation or human error could lead to a nuclear calamity.

Pope Francis in characteristically direct language said, “Spending on nuclear weapons squanders the wealth of nation. ... When these resources are squandered, the poor and the weak living on the margins of society pay the price.” This is another reason why he sounds the alarm, “Nuclear deterrence and the threat of mutually assured destruction cannot be the basis for an ethics of fraternity and peaceful coexistence among peoples and states.” 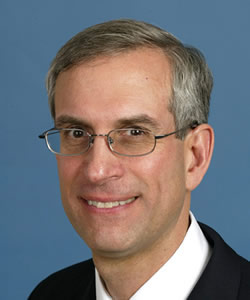 Stephen Colecchi served as the director of the Office of International Justice and Peace of the United States Conference of Catholic Bishops from 2004 to 2018. He worked on various international issues and coordinated the office's work with Catholic Relief Services, the Church, and other international bodies. Colecchi previously served as special assistant to the bishop and diocesan director of Catholic Charities, Catholic Relief Services, and the Campaign for Human Development in the Catholic Diocese of Richmond.  Colecchi holds a doctor of ministry degree from St. Mary's Seminary and University, a master's degree in religion from Yale University, and a B.A. from the College of the Holy Cross.