Dr. King, Black Lives Matter, and the Legacy of Hope

Among the most poignant scenes from the Civil Rights Movement are photographs from 1968 of striking Memphis sanitation workers holding signs that said, “I am a man.” These iconic images capture the rhetorical complexity with which Martin Luther King and the Civil Rights Movement sought to overturn racism and economic oppression in their day. From a pragmatic perspective, strikers’ refusal to work for substandard wages in inhumane conditions strategically leveraged their collective power to demand justice. After all, as the citizens of Memphis discovered when the garbage began to pile up, the city needed these workers in order to function. On another level, however, protestors defiantly asserted their status as persons, declaring a moral truth about themselves that did not depend on society’s assent for its veracity. Indeed, the very act of protesting symbolically enacted the truth of what they proclaimed in a way that was profoundly self-empowering. Their actions reflected Ralph David Abernathy’s oft-made claim that “if the Negro is to be free, he must free himself” [1]. But not only were they declaring this truth to themselves, they were also communicating it to the broader society, which made the protest an inherently relational act. By occupying a public space and holding signs that said “I am a man,” they used prophetic irony to engage the dominant culture, rebuking white society for its blindness but also inviting white fellow-citizens to imagine a society in which all persons, black and white, were treated as fully human. Declaring “I am a man” was thus an exercise in personal and collective power, but also an invitation to community.

Black Lives Matter (BLM) is similarly multidimensional in its resistance to police brutality and other forms of persistent racism. As with those signs that said, “I am a man,” BLM self-reflexively declares the fundamental truth of black personhood. At the same time, by making that declaration in public spaces, the movement likewise engages the broader society, employing prophetic irony to confront the nation with its continued failure to include black lives in the category of “all lives.” Its core assertions assume transcendent values regarding the dignity of persons, values held in common with the dominant culture. And in the very act of engaging the broader society, the movement holds out the possibility society can change.

Black Lives Matter thus mirrors the fundamental conviction running throughout Dr. King’s rhetoric, that all of life is interconnected, that we are inextricably bound up in overlapping systems, entwined together economically, but also morally and even spiritually. We are members of a “widely separated family,” fellow-heirs of a “world house” in which we “have to live together” [2]. This conviction, which grew out of both King’s Christian faith and his assessment of structural realities, helped sustain his commitment to nonviolent protest since, he believed, only nonviolence held out the possibility of reconciliation. BLM’s prophetic engagement with U.S. culture reflects that same spirit of possibility. BLM offers an alternative to the nihilism Cornel West called the ultimate threat to black America, a “numbing detachment from others and a self-destructive disposition toward the world” that grows out of blacks’ lived experience with “horrifying meaningless, hopelessness, and . . . lovelessness” [3]. For all of the anger and outrage behind the cry, “Black Lives Matter,” the movement holds out the hope that we might still live together in a society marked by justice and goodwill. 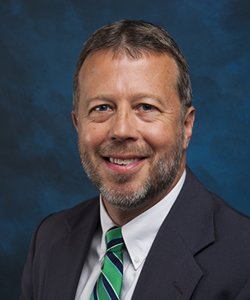 Gary Selby is professor of ministerial formation at Emmanuel Christian Seminary, Milligan College, and previously served as the Carl P. Miller Chair of Communication at Pepperdine University. The author of Martin Luther King and the Rhetoric of Freedom: The Exodus in America’s Struggle for Civil Rights (2008), he has published studies on Frederick Douglass, Martin Luther King, Jr., and Ralph David Abernathy, as well as on early Christian rhetoric and religion and the public sphere.