Islamophobia, Anti-Blackness, and the Challenges of Healing Muslim-Christian Relations in the United States

To understand the contemporary climate of fraught relations between Muslims and Christians in the United States, we must account for the broader history of anti-Muslim racism. Anti-Muslim racism, or Islamophobia, is rooted in anti-Blackness and has been an American reality since the country’s inception. This was long before Donald Trump’s presidency and the precipitous rise of hate crimes against Muslims (and those perceived as Muslims) in the wake of 9/11. While Barack Obama repeatedly faced Islamophobic attacks that he was a “secret Muslim” throughout his presidency, Thomas Jefferson was actually the first U.S. president to face such accusations from his political opponents. In both cases, “Muslim” was deployed as a racial epithet, demonstrating how Muslimness has stood in for un-Americanness since at least the eighteenth century.

To understand the contemporary climate of fraught relations between Muslims and Christians in the United States, we must account for the broader history of anti-Muslim racism.

Jefferson garnered accusations about being Muslim, Jewish, or otherwise a “heathen” in part because of his commitment to the principles of religious freedom. In the debates over the crafting of the Constitution, Jefferson advocated against imposing religious tests as a requirement for taking public office. Other Founding Fathers like George Washington and Benjamin Franklin were also proponents of religious tolerance, broadly conceived. And yet, the founders’ commitment to religious freedom and, more specifically, their willingness to accommodate Islam in America had specific qualifications, reflecting the inherently selective application of the nascent principles of American democracy. The Constitution was designed to protect and serve particular people (free white male landowners) to the exclusion of others (enslaved populations, free white women, and those who did not own property).

Similar principles of exclusion also informed the limits of religious freedom. In the late-eighteenth century, as the Founding Fathers advocated for Muslims’ religious freedom, they actively ignored those already in their presence, in fact on their own properties, who had been captured and brought to U.S. soil by the transatlantic slave trade. Many of these enslaved Muslims were forcibly converted to Christianity by their slavers, though some subversively maintained Islamic practices. The first U.S. Muslims, then, were not only subjugated through enslavement, but they were also denied the right to openly practice their faith. In other words, Jefferson’s principles of religious freedom were not extended to the Black Muslims in his midst.

As the Founding Fathers advocated for Muslims’ religious freedom, they actively ignored those already in their presence, in fact on their own properties, who had been captured and brought to U.S. soil by the transatlantic slave trade.

The fact that the Founding Fathers may not have recognized these enslaved Africans as Muslim is worth interrogating here. Religious and racial identity in America has always been intertwined, with (Protestant) Christianity typically signifying whiteness. Positive and accommodating eighteenth-century American attitudes toward Muslims, that touted Islam as a rational faith that could conceivably have a legitimate place in the Enlightenment milieu, were necessarily irreconcilable with constructions of Blackness. In fact, religious studies scholar Edward E. Curtis, IV, highlights how white slave owners racialized prominent enslaved Black African Muslims as Arab/Moorish, on account of how their literacy and class backgrounds disrupted notions of Blackness. In other words, these African Muslims were stripped of their Blackness on account of their Muslimness, demonstrating the interdependence of religious and racial identity.

Despite the erasure of Blackness and Islam from these enslaved communities, Black Muslims including Ahmadiyya, Moorish Science Temple, and Nation of Islam members became the face of Islam in America by the early twentieth century. They were again made invisible following the post-1965 influx of primarily Arab and South Asian immigrants. Today, Muslims in the United States are a racially and ethnically diverse cross section of the American population that continues to grow. However, the increased Muslim presence in the United States has not translated into widespread acceptance, most notably demonstrated in the inflammatory anti-Muslim rhetoric and policies of the Trump administration.

However, hostile American attitudes toward Muslims did not originate with Trump, who simply embraced the nativist tendencies that have always been an influential component of U.S. politics. His policies resemble an earlier period in U.S. history when whiteness and Christianity were requirements for citizenship. Indeed, Muslims were barred from naturalization until the middle of the twentieth century. The post-Cold War era brought the idea that Islam was antithetical to U.S. Christian values, and Western civilization more broadly, into the center of American foreign policy. Academics like Samuel Huntington, whose 1992 essay “The Clash of Civilizations?” posited that Western (Christian) civilization was under imminent violent threat by “Islamic civilization,” facilitated this shift. Today, race and religious identity continue to determine who is a real American, and who ought to be eligible for constitutional protections such as religious freedom.

Today, race and religious identity continue to determine who is a real American, and who ought to be eligible for constitutional protections such as religious freedom.

Additionally, with respect to voting patterns in the 2020 presidential election, racial identity across religious affiliation figured prominently in determining which candidates voters supported. While the vast majority of U.S. Muslim voters supported President Joe Biden, it is noteworthy that Muslim support for Donald Trump significantly increased between 2016 and 2020. For Muslim Trump voters (as with Trump supporters more broadly) race and class were the strongest determinants for why they chose an openly Islamophobic candidate. Put another way, the majority of Muslim Trump voters identified themselves as white and wealthy. This signifies that there is already common ground among Muslim and Christian political conservatives of a shared race and class. However, this common ground is detrimental for many religious and racial minorities including both non-white Muslims and Christians.

Accounting for how the ideals and structures of white supremacy impact Muslim-Christian relations in the United States is a necessary precursor to meaningful interfaith dialogue.

Interfaith dialogue, then, cannot simply proceed from the language of the Founding Fathers and Enlightenment ideals of religious pluralism. Invoking the inclusive rhetoric of Jefferson, Washington, and others can certainly legitimize contemporary arguments for the expansion of religious freedom as a distinctly American project, as many scholars, lawyers, and activists have shown. However, these ideals are imbricated within the structure of white supremacy and need to be acknowledged as such. We are in a moment when as a nation, we are beginning to more forcefully reckon with anti-Blackness and structures of violence such as police brutality. These issues are not separate from fractured Muslim-Christian relations. Muslims are Black victims of police violence and incarceration, and non-Black Muslims are also racialized as political others subjected to state violence including surveillance and draconian immigration policies. Interfaith dialogue and encounter that acknowledges the imbrication of Muslim-Christian relationships with these racial and political divides can contribute to their healing. 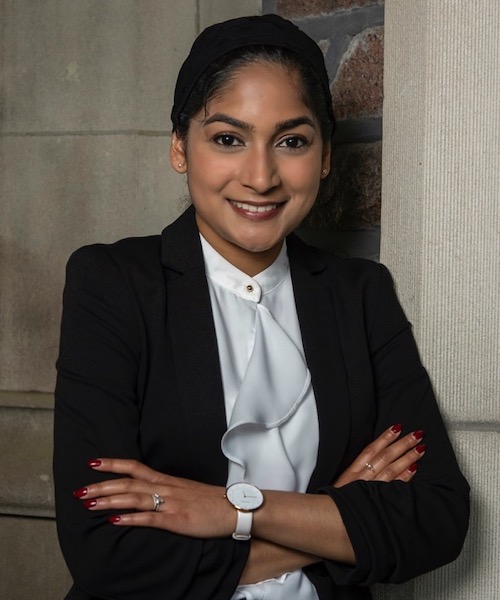 Tazeen M. Ali is an assistant professor of religion and politics at Washington University in St. Louis. Her research and teaching focus on Islam, gender, and race in America. Her forthcoming book, Authorizing Women: Islamic Authority at the Women’s Mosque of America, explores these themes.