Muslims in the West

The seminar examined the formation and growth of the Muslim communities in North America and Europe, with specific focus on France, Germany, United Kingdom, and the United States. It provided a history of the formation of the various Muslim communities in the West; explored the dynamics of community and identity development of the immigrants in a Western context and various government integration policies (multiculturalism, laicite, and assimilation); the development of Western depictions of Muslims as labor migrants, ethnic enclaves to Muslims, and increasingly as terrorists. It also explored the creation of an Islamic minority perspective particularly among the alienated youth as a response to Islamophobia, and the various Muslim effort to create an authentic Muslim Western identity through literature, music, fashion, and art. This class (HIST 363) was taught by Yvonne Haddad as a Doyle Seminar (small upper-level classes that foster deepened student learning about diversity and difference through research and dialogue). 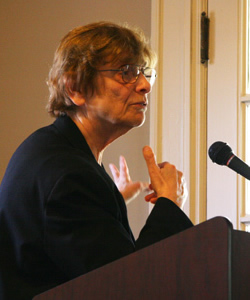