Leadership Consultation on Scaling up Faith Community Impact against Malaria

This consultation assessed the landscape of faith contributions on malaria and discussed possible ways forward towards greater faith involvement. Participants included leaders from the faith-inspired development community and from global organizations active around the issue. A draft report prepared by the Berkley Center and the World Faiths Development Dialogue served as background for the consultation. Georgetown University President John J. DeGioia introduced the gathering.

The major outcome of the consultation was an agreement by several of the attending parties to work as a task force to integrate faith communities into an upcoming major funding push in Nigeria, home to nearly 20 percent of worldwide malaria deaths. The task force first convened in January 2009, with the initial goal of mapping faith assets in Nigeria. Ultimately, the task force sought to create a replicable country-level coordinating mechanism for integrating faith community assets into national malaria control plans in malaria endemic countries; as a result, the Center for Interfaith Action on Global Poverty supported the creation of the Nigerian Inter-Faith Action Association, an independent Nigerian-led NGO co-chaired by the Sultan of Sokoto and the Catholic Archbishop of Abuja and led by Executive Director Bishop Sunday Onuoha. Another significant outcome of the consultation was a call to establish an online database of faith assets on malaria.

This event was hosted by the Center for Interfaith Action on Global Poverty and co-sponsored by the Berkley Center for Religion, Peace, and World Affairs. 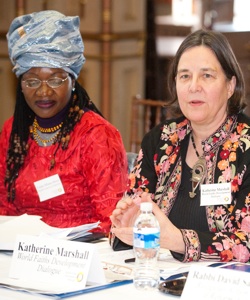 Leadership Consultation on Scaling up Faith Community Impact against Malaria

This report offers highlights of a December 2008 consultation, co-sponsored by the Center for Interfaith Action on Global Poverty and the Berkley Center for Religion, Peace, and World Affairs, on faith communities' role in the fight against malaria and describes recommendations for action.

This report surveys the contributions of faith-inspired organizations to the global fight against malaria and suggests ways to increase their participation and effectiveness.
Opens in a new window