Background: As part of the International Higher Education Interfaith Leadership Forum, in June 2016 Breanna Bradley conducted an interview with Lian Gogali, who is the founder of Institute Mosintuwu. Gogali discusses her inspiration for founding Institute Mosintuwu in Indonesia and its efforts to empower and educate Muslim and Christian women in interfaith and peacebuilding efforts.
Can you give a brief overview of your professional and academic life, outlining major moments that brought you to interfaith work? How did you come to create Institute Mosintuwu?

I grew up in a small, remote Christian village in Poso, Central Sulawesi, Indonesia. I left in 1997 to go to Yogyakarta, on the island of Java, to gain a university degree in theology, and never planned on returning. But when my father suddenly died in 1999, I had to return to Poso for his funeral. The Poso I had left behind was gone, and in its place was a region where Muslims and Christians were now pitted against each other in a series of brutal riots and killings. Members of my family were dying. My sister’s house was burned down by Muslims, causing her to become internally displaced in camps with terrible sanitation and standards. The school I had learned in as a child was destroyed. Poso was in ruins, and it was only the beginning of a terrible decade-long conflict that resulted in thousands dead—both Muslim and Christian. The area became extremely segregated between Muslims and Christians, and no one could cross those boundaries without the threat of being killed.

I returned to Yogyakarta, which is the center of pluralistic thought in Indonesia, to continue studying for a master’s degree. I had joined two interfaith communities during my time as a student, and I understood the importance of interreligious tolerance and understanding in Indonesia. But I wanted to gain direct experience in the field, and not just understand these issues in theory within the comfort of Yogyakarta. I got a scholarship to return to Poso and do research there in the camps for internally displaced persons (IDP) in 2002. Poso was now almost unrecognizable from the conflict. The area had been flooded with outside jihadists who were using Muslim conflict victims to cause further violence in the name of religion and revenge. I became very interested in the abuse of religion in the conflict for political and economic purposes. I was also becoming very interested in the stories of women and children who were living as IDPs.

Through my research, I was surprised to find many stories of tolerance, support, and peace among both Christian and Muslim women during various moments of conflict and violence. These peace stories were my inspiration to return permanently to Poso from Yogyakarta, even though I knew I would face social ostracism as I had newly become a single mother. But I could not stay in Yogyakarta and forget about the women and children in Poso. I was touched by the recurring question I received from women during my research: “After you are done with your research, what will you do for the conflict in Poso?” I was in debt to them, and so I came home in 2007. I had a dream to establish an alternative school that teaches tolerance, peace, and civil rights through a school for women, because women in Poso are the most untapped resource for religious tolerance and peace. In 2008, this dream became a reality, and I founded Institute Mosintuwu. Mosintuwu means sisterhood, togetherness, and living together in a manner that crosses the boundaries of religion.

You mentioned stories of peace in place of violence among Christian and Muslim women during the conflict. Can you tell me one or two of those stories?

Another story that affected me was from a Christian family. One day, some people from outside their village came to burn it down and kill all the Christians. As they were searching for Christians in the village, the Muslim women let the Christians hide in their houses and gave them headscarves to put on to disguise them as Muslims. After they got rid of the people who wanted to burn down their village, the women protected and guarded each other. Stories like these were rarely told in the media.

You said that Institute Mosintuwu is an alternative women’s school. How is your school structured? What are the women taught? What are your long-term goals for the school?

Institute Mosintuwu is the first foundation in the Poso region to unite women from different social, religious, and ethnic backgrounds to learn, listen, cooperate, and develop a healthy, just society together and build communication and trust among different communities. The school is for grassroots women, such as housewives and fisherwomen, many of whom only graduated from junior high school. Some of them can’t even read. The women are learning a series of nine topics that are training them in peace activism in both the community and their homes, and also in how to make their voices heard. In the beginning, we focus on peacebuilding, so the women from different religions and ethnic backgrounds can dismantle their trauma, suspicion, and hatred, and build trust. Only after we do that do we move on to talk about gender and justice issues. We talk about how women’s voices can influence the design, planning, implementation, and monitoring of post-conflict development.

This entire program will be called The Movement of Interfaith Women for Peace and the Fulfillment of Social, Economic, Political, Cultural and Civil Rights. The targets of the program are: 1) participation by women in Poso from different economic backgrounds and social statuses, especially within the various religious and ethnic groups of the Poso District; 2) learning about gender issues and peacebuilding and then acting as promoters of peace and harmony, as well as the creation of networks within villages, different sub-districts, and in the larger Poso District; and 3) creation of models of peaceful development led by the women’s interfaith movement.

The original curricula of the school’s program consists of Religions, Tolerance, and Peace; Gender; Women, and Culture; Women and Politics; Economic, Social, Cultural, Political, and Civil Rights; Public Speaking and Reasoning; Sexual Health and Reproductive Rights; and Economic Solidarity. We discuss these topics and include a course that trains the women in public speaking skills so that it can help them convey their opinions. We also decided to add a course on Public Service Rights, to make sure there was an increase in women’s awareness of their role and to make sure post-conflict development does not become gender- or religion-biased.

The curricula sequence is made for three key stages in the process of empowerment of women:To implement the idea of a women’s interfaith movement, after this education, women join the Women’s Village Reforms. This movement consists of five teams: the media team, rural enterprise team, safe house team, children’s team, and women’s advocate team.

Given all the interreligious conflict in the world today, why do you think that creating dialogues is important and effective? What are your hopes for your institute, Poso, or Indonesia in general through this work?

Interreligious dialogue is important to break down prejudice, suspicion of other religious communities, and to deal with feelings of vengeance resulting from mutual killing and slaughter between the two communities during the conflict. Interreligious dialogue also needs to raise awareness and acknowledge conflict so that people can learn and reflect and ensure it doesn’t happen again.

This dialogue is important to rebuild a peaceful life after the conflict, to put the past in perspective so that the post-conflict generation in Poso can work together and live in peace. The dialogue is also important in order to remember and prevent the two communities from being pitted against and played off each other for outside interests. The communities are vulnerable to manipulation of the vengeance and hatred of the past. The dialogue is equally important to developing stories of peace in the grassroots community so that they are not drowned out by the idea that the conflict in Poso is a religious conflict. Once these communities have processed the conflict and are able to move forward, the dialogue can also help Muslims and Christians work and fight together to meet their economic, social, cultural, and political rights.

Institute Mosintuwu has thus far succeeded in facilitating this dialogue. For example, at our school in Pamona, a Christian-majority area, the students took a field trip to the new mosque, which was rebuilt after being burned down. The women concluded from their time there that religion does not teach violence, but instead that religion has been abused as an excuse to cause violence. This made them understand that the conflict in Poso was not because of violence, but because of political and economic problems that resulted in religion being used to mobilize people.

Several members of the school lost family members during the conflict, because of a large bombing in 2005, and had a dislike and fear of Muslims. They were upset when they first entered the mosque, but after explanation about jihad and an open dialogue with an imam, the women began to develop an understanding that the bombing was not the result of a religion, but instead the act of misguided individuals. One woman said, “I disliked Islam, but now I know it’s not Islam, but the individuals who are responsible.” Upon being accepted by the Christians, a member of the Muslim community in Pamona held a thanksgiving service that used both Islam and Christianity in their prayers.

I hope that through Institute Mosintuwu more meetings that result in tolerance and understanding can occur. I have a dream that the people of the world will live in peace although they have different religions, ethnicities, and backgrounds, and they will work together to achieve a better life. Women and children can be a model and a voice for peace and rights. I want to continue building and developing a mutual understanding, awareness, and respect of this diversity. I will continue to develop Institute Mosintuwu to spread tolerance, peace, and justice in every post-conflict region in Indonesia, develop better dialogue methodologies, and facilitate meetings between religious communities. I also want to strengthen cooperation among religious institutions, spiritual, and cultural leaders.

Mosintuwu, an alternative interfaith dialogue for peace and justice, is an initial step for the next phase, which is to establish a grassroots interfaith organization. I hope to develop an interfaith organization that connects grassroots communities throughout Indonesia and the world, who will not only integrate dialogue in their daily life, but will campaign for harmony in diversity and work together to achieve peace and justice. 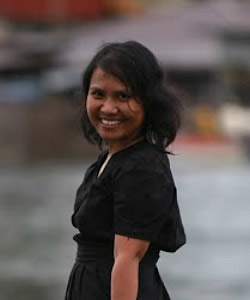