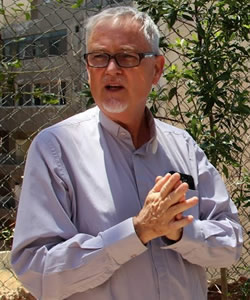 Father Michael Linden, S.J., is a Jesuit priest and the Jesuit superior of Jordan and Iraq. Based in Amman, he has been in Jordan since 2011 after serving in the Caribbean, the United Kingdom, and Africa. Linden oversees the operation of English-speaking ministries in Amman and manages cultural programs, outreach, and Bible courses at the Jesuit Center, which is a pastoral center for Arabic-speaking people. Linden also oversees the work of the Jesuit Refugee Service in Amman. He joined the Society of Jesus in 1968 as a member of the New England Province (now USA Northeast Province) and was ordained a priest in 1980. Linden received graduate and postgraduate degrees in economics from the University of Chicago.