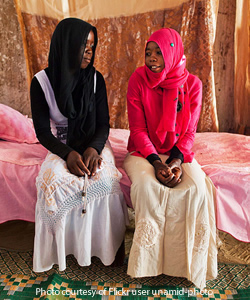 Ending child marriage is one of today’s most compelling human rights imperatives. Since religious leaders conduct marriages, teach about the virtues of marriage, counsel couples on what marriage entails, and host marriage ceremonies in sacred places, they have a unique ability, and thus a weighty responsibility, to support global efforts like Girls not Brides.

The harm caused by early marriage is great and well established. We know the benefits of education, especially for girls, and early marriage defeats that goal. Girls younger than 15 are five times more likely to die in childbirth than women in their 20s. Child brides are more likely to contract HIV because they often marry an older man with more sexual experience. Girls who marry before 18 are more likely to experience domestic violence than women who marry later. Families, especially children, suffer.

Few argue against the international appeals to honor the human rights of children and especially girls, to choose who to marry and to finish their education before having children of their own. So why does the practice continue? Five answers stand out: it’s traditional (true—that’s the way it used to be); especially in poor communities, girls tend to be viewed as a burden on the family and marrying them means fewer mouths to feed; girls are less valued than boys and so their rights and wishes are denied; parents worry that unmarried girls are vulnerable for example to rape, whereas marriage secures their place and household; and quality secondary schooling for girls is often unavailable or too costly for poor families.

Action on all five reasons for child marriage is needed. This clearly presents large challenges to societies at community, national, and international levels. It involves all segments of society.

But above all social norms need to change. That means both working to honor and respect girls so that their interests and wishes are uppermost and focusing specifically on age of marriage as an essential social barometer. Religious actors can play a leadership role on both topics. A few leaders and institutions have taken a stance but many more ignore the topic.

It is not easy to pinpoint how far religious teachings and beliefs truly influence private morals and behavior. It is easy to recognize that: “it’s complicated”. And indeed it is. Birth control? Resisting the temptation to corruption? Telling the truth in politics? There are glaring gaps between religious teachings and behavior. But on marriage, surely there is little to no wiggle room. Religious leaders and religious institutions can act firmly and effectively to insist that rights and laws are respected and that the human dignity of girls is truly honored by making sure that no marriage takes place when the girl is too young and when she is not willing.

If a coalition of religious leaders and religious communities joined together to take a firm stance on age of marriage, together with assuring that the right to consent is truly honored, it could make an enormous difference.