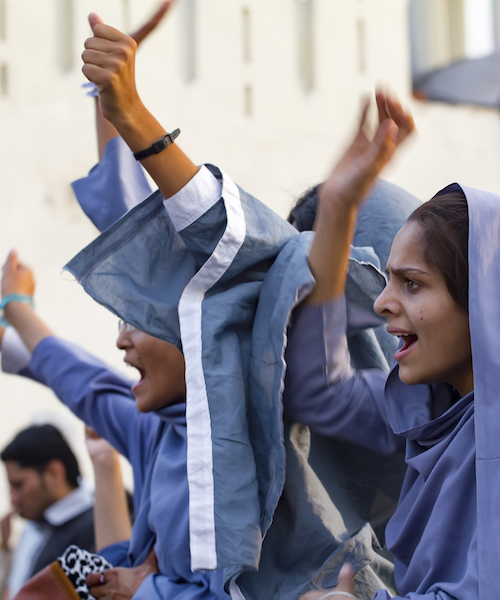 May 29 is the International Day of United Nations Peacekeepers, and the UN Secretary General has focused this year on women’s roles. He and the UN system overall, including the Department of Peacekeeping Operations, are thus underlining a longstanding effort to highlight women’s roles in the quest for peace. In October 2000, the Security Council of the United Nations adopted Resolution S/RES/1325 on women, peace, and security, spurred by stunningly low numbers of women visibly involved in peace negotiations and also in the processes that surround them. Since 2000, there has been inching progress, but women’s roles, crucial and varied as they are, tend to be largely invisible. Too often the focus on women is sadly as victims, of sexual violence but also as those who suffer from the harsh disruptions that go with conflicts, spending protracted years as refugees.

If women are largely invisible in photographs of peace negotiations and signings of peace treaties, the almost complete absence of women with religious affiliations is still more striking. The book that Susan Hayward and I co-edited, Women, Religion, and Peace: Illuminating the Unseen (United States Institute for Peace, 2015), looked both at different religious traditions where women’s roles for peace are significant and at the courageous work of women in many quite different situations that is inspired by varied religious traditions. The research for the book was, however, a scratching of the surface. Exploring, documenting, and honoring the roles that women play is very much an unfinished agenda.

An interesting set of questions turn around vocabulary. Today celebrates “peacekeepers,” which commonly refers to peacekeeping forces, the United Nations blue helmets. Women are represented now, but are very few. And while there are instances of cooperation with religious bodies (say in the Central African Republic and the Philippines), the main gender issues, sadly, have turned around abuse.

“Peacemaking” commonly refers to processes of negotiation, conjuring images of tables at Versailles and other famous sites where treaties were forged, generally by men. Today’s peace processes tend to be messier, involving multiple parties, government and non-government, official and unofficial. In West Africa’s conflicts women like Hadja Mariama Sow were much involved in the efforts that have finally brought peace. Lehmah Gbowee was awarded a Nobel Peace Prize for her work there. In the Horn of Africa and South Sudan, Agnes Abuom, acting both individually and through the World Council of Churches, has played multiple roles (and continues to do so).

Once an uneasy peace deal is forged, the process of restoring peace takes many years and different forms. Though there is a theoretical timeline involving disarmament, demobilization, and reintegration, in most situations the path from armed conflict to lasting peace is bumpy. Few have witnessed this more directly than Sister Denise Coghlan, RSM, who returned from refugee camps for Cambodians in Thailand to post-Khmer Rouge Cambodia. She has worked tirelessly since then for peace from countless angles, including refugee resettlement and supporting people disabled by landmines, current migrants, trafficking victims, and others. She was part of the global alliance that negotiated the landmine treaty, and the Nobel Prize sits at her center in Siem Reap. Sister Denise will accept no credit for herself, but she is a force of nature, as is Emma Leslie who works with women across the world, training true peacebuilders. Tragically Dekha Ibrahim, a Kenyan leader who took community conflict resolution to a global level, died in a car crash, but left important legacies.

A term of art today is “peacebuilding” which indeed expresses well the basic idea that peace is neither made nor can it truly be kept. It must be built, in attitudes, leadership roles, institutions, and processes. It flows essentially from hope that there is justice and a better future ahead, respect among people, and what is often called dignity. Here is where remarkable women play remarkable roles. They include Kezevino Aram, an Indian pediatrician who is inspired by the ideas and ideals of Mahatma Gandhi and who now serves on multiple interfaith boards as a determined leader. Dena Merriam has forged the Global Peace Initiative of Women that works to put environmental justice on the agenda as an integral aspect of peace. Scilla Elworthy marshals intellectual forces and grass-roots organizations with what she calls Buddhist-Quaker principles in a search for global peace, from abolishing nuclear weapons to community welfare. Marie Dennis likewise has a focused determination that non-violence is the way to go. And Rosalina Tuyuc Velasquez drew on Mayan traditional values and her bitter experience of the forced disappearance of her father and husband to bring women together as a powerful force for justice. There are many more stories, most still to be told. These women come from different traditions and have radically different styles, but they are linked by deep commitment to peace and by deeply inclusive approaches to what they do.

Religions for Peace, the global interfaith movement and organization, has a 50-year history of bringing religious teachings and practice to bear working for peace. Professor Azza Karam now leads the organization, bringing a long history of working to highlight the fully equal rights of women and their deeply practical and spiritual roles. This strong-minded, determined, brilliant, Egyptian-Muslim woman brings her years of experience working within the United Nations system, and a sober but visionary understanding of what building peace entails. More power to her and to her many invisible colleagues. They offer what many, myself included, yearn for most, which is peace with justice, caring, and compassion.