Catholic Perpetration and Reconciliation in Rwanda 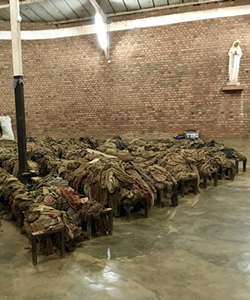 I usually attend Pentecostal and Evangelical Restoration services with my host family. Last Sunday, I tried something new: Rwandan Catholic Mass. The Catholic Church has a long history here. It arrived in the late 1800s alongside German colonists and became the religious authority. Since then, it has served the nuanced role of both a facilitator and reconciler of conflict.

It is commonly acknowledged that ethnic Hutus perpetrated the 1994 genocide against ethnic Tutsis. But these groups did not always exist as such in Rwanda. Prior to Western intervention, "Tutsi" and “Hutu” were socioeconomic classifiers, the former being pastoralists and the latter agriculturalists. There was mobility between the two groups. When the Church came to Rwanda, it brought with it the Hamitic Myth, which viewed Tutsis as superior descendants of Europeans and Hutus as their uncivilized counterparts. Thus began 70 years of pro-Tutsi discriminatory policy.

The 1950s saw a shift in the relationship between the Belgian government (which had gained control in 1916), Catholic Church, and Tutsi elite. Tutsis of influence demanded independence and challenged the Church’s monopoly over the provision of social services. At the same time, there was an influx of Flemish clergy that, marginalized at home, found solidarity with the oppressed Hutu. Those Church leaders helped Hutus organize through media, education, and sermons. They fostered the leadership of the 1959 Hutu rebellion, during which thousands of Tutsis were killed and exiled.

The Hutu majority gained power after independence in 1962. Over the next 30 years, the Church and the state fused together. This was epitomized by the fact that the archbishop of Rwanda served on the ruling party’s Central Committee. Tutsis were systemically removed from politics and other institutions while the Church disseminated hateful ethnic-based education provided by the government.

When killing commenced in 1994, the Church was in the middle. On one hand, Catholic bishops wrote to warn of the impending crisis in 1993. Upwards of 200 clergy and nuns were slaughtered in 1994, many working to save Tutsis. Rwandan civilians, such as a Hutu rescuer we met, acknowledge their Christian faith as a source of strength during the genocide.

On the other hand, many of the major massacres of the genocide occurred on Christian grounds: individuals sought sanctuary in churches and then were murdered en masse. Roughly 5,000 perished at Ntarama Church, and approximately 10,000 took their last breath in Nyamata. Many priests were complicit or served as perpetrators in the conflict. For instance, Father Athanase Seromba had his church bulldozed with over 3,000 Tutsis inside.

Post-conflict, the Church assumed the role of a reconciler. It works tirelessly to inject messages of love into the community, and results are showing. A former perpetrator serving at a civic education camp told us, “I have love in my heart, and I have learned as Jesus loves people, we must love everyone.” At a 2008 United Nations event, the Catholic Church was heralded as a hub of safety and humanitarian assistance, an intermediary role player, an engine of democratization, institution-building, and participation, a UN/State peacekeeping and building accompanier, and a capacity builder and institutional moralizer.

Nevertheless, the Church still faces challenges in Rwanda. Many were frustrated by the Vatican’s refusal to acknowledge any institutional responsibility for the genocide. That changed in March of this year (over two decades past the conflict), when Pope Francis asked for forgiveness of the “sins and failings of the Church” in 1994. Furthermore, the Catholic Church has seen a sharp decline in membership. This is shown through census data, which shows 49.5 percent of the population as Catholic and 39.4 percent as Protestant in 2002, but a reversal to 43.7 percent and 49.5 percent respectively in 2012. Pastor Antoine Rutayisire—who converted from Catholicism to Protestantism himself—said that following the genocide, Rwandans turned to the Catholic Church “to pull the pieces together,” but found the Church was operating as “business as usual,” causing them to “run away from it.” In other words, many Rwandans found the traditional nature of Catholic Masses insufficient for internal and external conflict resolution, so they decided to find more “personalized” forms of worship.

Now, the Catholic Church again finds itself at a crossroads. While Rwanda hosts a vibrant faith community, many are turning to other forms of Christianity. Moreover, the Church is associated with both genocide instigators and reconcilers. Actions such as those of Pope Francis, as well as ongoing efforts by local clergy, will hopefully overcome the wrongs of the past and solidify the Church’s position as a peacebuilder going forward.