Faith and Education in France 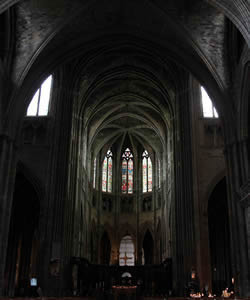 Every Monday, I volunteer at a private Catholic K-12 school where I lead 50-minute conversation groups of 11-, 13-, and 15-year-olds to help them practice English with a native speaker. To many, I am the first flesh-and-blood American they’ve encountered, leading to an endless stream of questions:

“Does everyone in America have guns?”

“Do you smoke? Do other Americans smoke?”

At first glance, École Saint-Genès is a typical establishment, with packs of unruly kids roaming the hallways between classes and soccer balls flying across the courtyard during recess. A Catholic university student myself, I pay no mind to crucifixes adorning the walls of every classroom or the statue of Saint Jean-Baptiste de La Salle, whose teachings inform the school’s mission, greeting visitors across the central yard. But in a country that prides itself on its strict separation between religion and the state, a growing preference for a private, religious education appears curious.

Between 2005 and 2016, the percentage of French children enrolled in private schools grew from 20 percent to 21.5 percent. The general secretariat of Catholic education in France estimates that 10,000 more French students enrolled in private Catholic schools during that period. For comparison, only 10 percent of U.S. students were enrolled in private schools in the 2013-2014 school year. Such popularity of religious education does not at all reflect the commonplace assertion I’ve heard over and over since arriving in Bordeaux: religious life is dying a slow death in France, and secularism is thriving.

When we toured various cathedrals during our program trip to Toulouse in January, the tour guide informed us the most churches now served primarily as national historic monuments rather than places of worship. Most cathedrals allowed tourists to enter even during Sunday Mass, and the turnout for Mass generally was dwindling. Yet when I briefly attended Mass at the Saint Andrew Cathedral of Bordeaux, I was surprised to find a substantial crowd of worshippers.

Not Catholic myself, I was simply curious to see if religious life in France was indeed on its way out. I expected to find older people and perhaps some families attending Sunday Mass, but instead I encountered many students my age, some with backpacks at the ready, undoubtedly intending to study at a nearby café after the service. Perhaps most surprising of all, many teenagers seemed to be attending alone, without parents or relatives, who I would normally expect to enforce attendance among this age group.

Yet in public schools, the separation of church and state is strikingly clear. While lecturing on sixteenth century religious wars in France and the theological differences between Catholicism and Protestantism, my public university history professor actually apologized for presenting religious material and clarified that we were learning it purely for its historical value. To me, spending nearly an hour to discuss basic facts about Protestantism (like who Martin Luther was) seemed trivial as I learned most of this information in my high school world history class. But as my history tutor later explained to me, the graduates of the French public school system never did because teaching religion is restricted to the private sphere.

Although the growing numbers of private school students may easily be attributed to families’ desire to assure a higher quality education that public schools may not be able to provide, my experience in Bordeaux has shown that religion continues to play an important role in French society in spite of conventional wisdom professing the contrary.