Within the global backdrop of women’s empowerment as central to humanitarian, economic, and social progress, this article explores the intersection of faith, gender, and family values with a focus on two very different masculinities trending in our world today: 1) men proudly reclaiming the "traditional" position of "head of the house" and presumed leader in church/society; and 2) men shifting to a side-by-side sharing of power with their wives and women in society.


As non-profits, both secular and faith-based, work tirelessly around the world to provide humanitarian relief to girls/women victimized by gender-based violence and harsh patriarchal cultural norms, there is an increasing awareness that gender power dynamics within the home continue to exert a powerful invisible influence on a woman's ability to recover and move forward. Indeed, these dynamics often devalue females and make them vulnerable to violence and discrimination.

In my humanitarian work of the past few years, I have encountered numerous faith-based (in my context, evangelical Christian) ministries and organizations which are doing incredible humanitarian work to deliver palliative care to girls and women. At the same time, in the backdrop of their work, there are still invisible gender norms which continue to sanction a model of exclusive male leadership in the family and within the church. These gender norms run counter to larger humanitarian goals most people today espouse for moving from a hierarchical social structure (with men on the top) to a more level gender playing field.

Religion exerts a powerful force on the deeper attitudes that drive our behavior and how we see our place in the world. The faith-based sector therefore can be a high-impact lever of change in the global work of gender justice. At its best, religion helps elevate our social conscience and lift our ideals to see beyond the power-based social patterns of our world to glimpse an alternative way of life. Yet too often religion becomes “static” and reinforces unjust social conventions rather than transforming them.

As people of faith, it is important that we take some time to look within at the gender norms we are throwing out into the world. In a contemporary society that affirms women's full human equality, we need to make sure we are not perpetuating the patriarchal parts of our tradition at the expense of the heart which beats for freedom and justice and equality for all.

How is Adam meant to relate to Eve? And Eve to Adam? In many ways, this relatedness forms the template for all other forms of relatedness across lines of difference. Are Adam and Eve meant to function in a top-down pyramid structure? Or side-by-side as partners, different in many ways, yet made from the same substance as image-bearers of God?

Across the United States, there is a new growing evangelical start-up church movement, very hip and cool and very justice-oriented, yet church after church that I encounter does not allow women to serve on their leadership boards and are encouraging men to "step up" to resume their rightful place as leaders in the home, in the church, and in society.

Likewise, a whole new crop of para-church family and men's ministries appealing to the Millennial generation are taking a conservative tilt calling for a return to "traditional" family values rooted in a hierarchical gender norm of males as "head" over females. As someone who has grown up within evangelical Christianity, I have heard all the softer variants of “men step up” (i.e. servant leader, tie-breaker in an argument). However, I never have—until recently—heard men encouraged to be “patriarchs” in the family. A campus ministry that my husband and I were both involved with has a family ministry which has article after article encouraging men to “step up” and become the “patriarch” of the family and for fathers to help their daughters find men to marry who know how to lead them. Indeed, significant numbers of men and women are leaving evangelical churches because of these hierarchical gender codes.

Adam Side-by-Side with Eve in Her Vulnerable Rising Up

I keep meeting men who are on board with women's equality. Men like Joe Keefe of Pax World Investments who has for decades been working tirelessly to create gender-balanced corporate boards. Men like Mark Peterson, president of Bridgeway Foundation, who joined Christians for Biblical Equality even before his wife and who is in word and deed subtly helping evangelical Christians to move beyond literalistic interpretations of the Bible to read it for its meta-narrative of human freedom from enslavement and inequality. Men like Ryan, executive director of Vision New England, an evangelical church-based network, who is encouraging his ministry to create a welcoming atmosphere for women ministers alongside men. What all these men have in common is that they are both deeply motivated by their faith and have a deep capacity for empathy/human solidarity across the gender line, each in their own sphere of influence leaning in with women to create a more gender-balanced world.

How do you see these two "faces of Adam" in our world today? How are these masculinities impacting our collective progress on the humanitarian/civil level to uplift and empower women in highly patriarchal places around the world?

Given the central role that religion continues to play in shaping humankind's moral imagination, it behooves us as people of faith who care about justice to hold a mirror to ourselves to ensure we are not complicit in our world's deeply embedded gender injustices. Ideally, we are doing our part to bring out the highest and the best of our faith traditions to offer a vision of human flourishing that fully embraces the full humanity, equality, and agency of men and women alike.

If we seek to enlist faith in the work of creating a more just world for the girl child to grow and chart her course in life, free of violence and discrimination, there is no better place to begin than to "be the change you want to see" right within the microcosm of the home, where we learn how to live, to love, to play, to work side-by-side, and to exercise power responsibly.

If subconscious, deeply ingrained power dynamics within the marriage/family sphere remain intact, how far can we really expect humanitarian relief efforts to overcome deeply systemic patterns of gender discrimination and violence that continue to marginalize, victimize and disempower women in our world?

Can we have it both ways? That is, can we as Christians (and people of any faith) have one arm working for the emancipation of enslaved female around the world while the other arm continues to hold onto a patriarchal power structure within the family and within our religious institutions?

How are men—in their own personal family values—navigating the presumption of power society has given to them? How are men of faith unlearning patriarchy?

This article complements another article called "Glimpsing Eve" which focuses on the female side of the gender line. 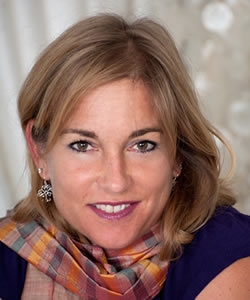 Emily Nielsen Jones is co-founder/president of the Imago Dei Fund and a philanthropist working to enlist the highest and the best of the world's faith traditions in the service of a more free, more just, gender-balanced world. In her role at the Imago Dei Fund, she has helped the foundation adopt a "gender-lens" in its grantmaking with a particular focus on partnering with inspired female change agents, locally and around the world, to build bridges of peace and create a world where girls and women can thrive and achieve their full human potential. Nielsen Jones has a B.A. from Dartmouth College and a master's degree from Boston University.