La Cueca: How Chile Dances its Way into National Identity

“What’s the national dance of the United States?”

It’s funny how many times I’ve been asked that question in the past two and a half months. Truth be told, before coming to Chile, I didn’t actually know countries were supposed to have national dances.

I didn’t realize how much I was missing out.

La cueca was officially made Chile’s national dance in 1979, but from all that I’ve gathered, it has existed as a part of Chilean culture for much longer. While there are different varieties, the cueca is always a partner dance that depends on audience clapping for the song’s rhythm and colorful handkerchiefs for a bit of artistic flourish.

Instead of three-legged races and hot dog eating contests, every Chilean asado (barbecue) ultimately divulges into the whole family clapping in a circle as different pairs take the center to dance. One of my favorite parts of watching the cueca is that it’s even still being handed down from generation to generation. Chilean students learn the cueca in high school, if not earlier, and so with the elderly couples dancing the classic huaso (Chilean horseman, similar to the American cowboy) cueca with real handkerchiefs, you’ll also usually find teenagers waving their scarves and napkins around as they perform the figure-eight steps.

It’s fascinating to me that a spaghetti-shaped country like Chile, with climates and geography that cover the entire spectrum of extremes, has managed to create and maintain such a strong sense of national identity. There is no country in the world that covers such a long north-south stretch, and the differences between the scorched Atacama desert in the north and the icy Torres del Paine in the south seem like they would divide a country into piecemeal regional cultures. To be fair, there are distinct cultural traditions as you travel up or down the coast. But it’s fascinating to see the way the country has nonetheless found a cultural common ground along which to develop its identity.

“You all have been flanked by two partners: the mountains and the sea, and they never abandon a Chilean,” President Eduardo Frei Montalvo told supporters from Chile’s north and south in 1964, and maybe that simple geographic consistency is where it starts. I had a fascinating conversation with my host mom one day when I mentioned watching a beach sunrise last summer. She looked puzzled for a second, and when I asked why, explained, “No, it makes sense. It’s just that in Chile the sun never rises over the ocean- always the mountains. I’ve never seen that.”

But the ties go beyond topography. Another, much more serious and painful part of the Chilean identity is the collective memory of Pinochet’s dictatorship. The 15 year military government in many ways ripped the country apart, and still today is rarely spoken about openly, but it’s interesting to see how a new unified Chile has grown during the past 20 years out of those fractures.

For September 18, Chilean Independence Day, a national law requires that every building fly a flag. An unusual rule from a US perspective, the law in practice isn’t particularly enforced. What’s interesting though is that all across the country, flags start appearing in every window by the very beginning of September. When my other exchange student friends and I commented about this to Chileans, they all shrugged it off. “It’s just a part of our culture. We always fly the flags through the whole month for Independence Day.”

Flags, dances like the cueca, pisco sours—at the end of the day, they’re just traditions. But when traditions are symbols, they can unite locations that are geographically remote from each other, constructing a whole new national identity. There may be a northern cueca and a Chilote cueca, a traditional version and an urban one, but the beauty is that it takes no more than a handkerchief—or even a scarf—to experience a piece of national identity. 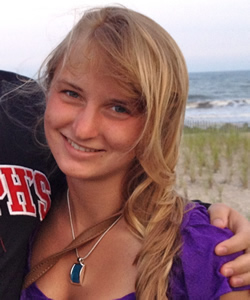 Alyssa Huberts graduated from Georgetown's School of Foreign Service in 2014 with a major in international political economy. She participated in the Berkley Center's Junior Year Abroad Network while studying in Valparaíso, Chile in fall 2012.