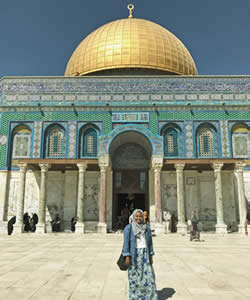 Startled, I take too long to remember the translation—passport. I scramble to grab my ID for the airport employee shouting the vague directions. I become increasingly nervous when I realize the group of women in front of me are balancing a number of documents in their hands. The employee stops at their group, scans the papers, and directs them to another line. I hear a man in the adjacent queue being told he does not have the right documents to enter the country. As the employee approaches me, my anxiety peaks. Do I have the right papers? Was I supposed to bring anything specific to prove I’m a student? Will I be refused entry?

The airport staff member pauses in front of me expectantly. He glances at the little blue book in my hands—before I can even present the picture page he nodded me ahead to proceed and purchase a visa. To him, the color was what was important.

The oldest inhabitants of Jordan, before significant immigration to the area began less than two hundred years ago, are the Bedouin tribes. A number of Bedouin tribes remain living in the way of their ancestors in tents, outside of main cities. They are the foundation of a country which welcomed millions of foreigners on its land in the last century. Their hospitality is unmatched.

My professor, who refers to himself as our “Bedouin Father,” expresses that the only Jordanian food is mansaf, a rice and meat dish cooked in a type of yogurt. Everything else—from kinafa to maqlooba—is from the immigrants. “Praise Allah," my professor says, “for the beauty they brought to this country.”

More than half of Jordanian citizens are originally from Palestine, their parents or grandparents having sought refuge in the country which borders their home. Four out of five taxi drivers, if asked where they are from, will answer Falasteen, which translates to Palestine. They will tell you which city or village is their family’s origin, or their asl. I have learned to stop asking if they have ever visited their home. The answer is always no.

“It is easier to get a visa to America than a visa to Israel.” My host brother is explaining to my surprised roommate the difficulty—or rather impossibility—for people of Palestinian origin to return and visit their hometowns. The conversation arose after I mentioned my upcoming trip to Jerusalem, which in turn brought up my host mother’s family roots in neighboring Palestine.

My roommate is still shocked as our host mom adds, without any spite, “You are American, so it’s easy for you.” The family has hosted foreign students for more than 15 years and has heard many Americans describe their vacation to Jerusalem. But my host family may never step foot in the city themselves.

A few minutes later, the conversation turns to gun violence in America. “Yeah, so it’s a problem,” I explain, “but not one that people think about every day. I mean, they make us do drills and workshops in case there is an active shooter, which are kind of intimidating, but other than that…”

Intrigued, my host brother comments, “At work, we only have fire and earthquake drills.” I am about to mention how they must be similar to the ones in the United States until he adds, “But when I was a child in the 1990s, during the Iraq-Israeli War [Gulf War], at school we would have drills to practice covering our mouths with wet cloths.”

Before I ask more, mildly confused, his sister says “Kiymiya.” I pause, knowing we had used that word in class that day. It comes to me: chemical weapons. I nearly gag at the proof of my privilege.

The night before I leave for Al-Quds, or Jerusalem, the cab driver is once again Palestinian. I ask him where he’s from in Palestine, and he responds “Khaleel,” which is the name of his hometown. He asks why I’m in Amman, and I respond “for school.”

At one point, out of good questions, I ask if he likes Amman. He smiles but it’s one that’s pinched on the sides of his mouth. “Of course, I love Amman. But I love Falasteen [Palestine] more.”

I decide to break my rule and ask if he has ever visited Palestine. When he says no, even though it is the answer I anticipated, my heart hurts knowing in less than 24 hours, I would be a tourist in the homeland he can only visit in his dreams. I am almost ashamed; I don’t deserve this. I do not mention my upcoming trip and stay silent the remainder of the ride.

This time I do not bother opening it, only showing the outside of my little blue book.