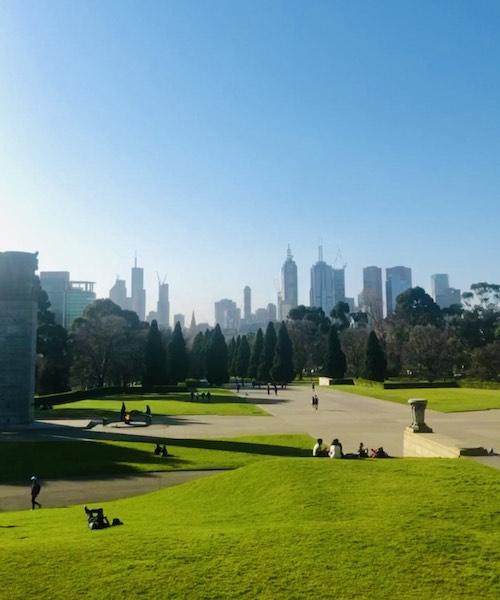 The worst part of my job is taking out the trash.

I work at a juice bar that also sells coffees, smoothies, and ice cream. It’s in the center of Melbourne, right in the most popular metro station. We have several dozen different recipes to memorize and prices to remember off the top of our head. Most of my customers speak in heavy accents, whether Australian or from somewhere else, and it’s hard to hear them over the music and the sound of smoothies blending. We get a lot of foot traffic and, somehow, at the end of every shift, I’m sporting a new cut or a new bruise. It’s a very demanding job—both physically and emotionally—as is any job in the service industry. And yet, the hardest part is taking out the trash.

I take out the trash once or twice per shift. It’s always me because I’m the newest hire. I stack up a trolley loaded with the day’s “rubbish” (because it takes them a moment to understand me when I say “garbage”), which includes everything from organic pulp, to juice cups, to napkins and paper towels. I race it down a floor to the rubbish center and spend the next ten minutes dividing up my trash into commingle, paper, cardboard, organics, and general waste. It’s a painstaking and dirty process that involves a lot of muscle, multitasking, and prioritizing, but at the end of it, I feel satisfied. I know I’ve made a difference in dividing up the rubbish because I’m helping to protect the environment by ensuring that recyclables can get recycled and that all organics are properly disposed of or used.

Imagine my disappointment when my boss tells me that they all go to the same place.

It reminds me a lot of the hypocrisy I find all over Australia and all over Melbourne. This country is beautiful — it is populated with the most diverse flora and fauna of any country in the world. It is home to a magnificent variety of natural treasures, from mountain ranges, to the Outback, to the Great Barrier Reef. And yet, even with all of its treasures, its government does nothing to protect them.

Like with most things, rubbish in Melbourne is dealt with superficially. Anyone who doesn’t know the ins and outs of the system would say that Melbourne is a leader in environmental and climate change policy. They would see the efforts made by employees and employers to ensure the upkeep of the environment, the control of pollution and garbage, and the awareness of how consumerism drives it all. Like me, they wouldn’t know that it was all for naught.

This superficiality harkens back to the way some assemblies begin — with an acknowledgement of the sovereignty of the aboriginal nations and the fact that this land does not really belong to the Europeans who settled here years ago. When I first noted these statements of acknowledgment, I was impressed; we are miles from that kind of progress of recognition and reparation in regard to the indigenous communities in the United States. And yet, after just a few months living here, I now know that the recognition for aboriginal communities starts and ends with that statement.

When I chose Melbourne over Sydney, I chose it because I knew it to be the more progressive city, the greener city. Certainly, it has one of the greatest systems of public transport in the world, and just outside of my job, over a hundred thousand students congregated to protest climate change under the helm of Greta Thunberg’s leadership. My interests in coming here were in studying environmental policy and how it affects the island nations nearby and the delicate ecosystems within the country itself. Though my lectures are filled with the impassioned words of my professor, they are punctuated by anecdotes of disappointment and dismay at the de facto policies of the city and the country as a whole. It brings me back to the same hypocrisy we see in politics at home and makes me wonder: If all of our progress is superficial in practice, can we ever say we’re really moving forward?