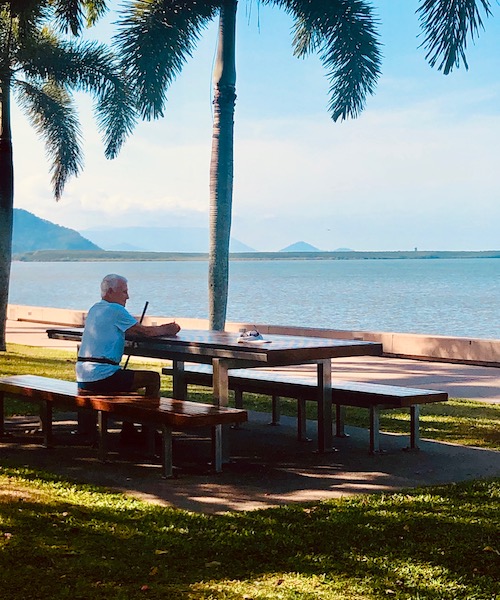 “Scomophobia” is a term that is as common as saying “barbie” and “cheers” in Australia. It’s a play on words meant to denote a dislike for the country’s conservative prime minister, Scott Morrison, or ScoMo, whose policies are anti-environment and anti-immigration. In my five months of living in the land down under, I’ve come to appreciate the natural treasures that this country boasts and have found it difficult to reconcile how some leaders would be unwilling to prioritize environmental protections.

Towards the end of my semester, I was privileged to have some time and money saved for travel, which I spent by crossing the Great Barrier Reef off my bucket list. It was a short, one-day visit to Cairns, the northern Australian town known as the gateway to the reef, but it was an enlightening one, nonetheless. The plane ride there made me a witness to the devastating bush fires that have been ravaging the continent with the increasing temperatures of an approaching summer, while also allowing me to marvel at the delicate reefs neighboring the burning landmass and the juxtaposition of the arid red of Australia and the brilliant blue of its sea. Both, despite their apparent contrast, are undeniably vulnerable.

But it was as I sat by the coast on Cairns, eating the best gelato I’ve ever had in my life, that the fragility of the world around me would become even more apparent through the unconventional and unexpected company of a local. I was approached by an older man, who was about 90 years old. His eyes were bright blue, his hair alabaster. In many ways, he reminded me of my own grandfather, not merely because of his appearance, but also for his zeal in the way he approached strangers, armed with stories to tell for hours.

He told me about his life as a sailor (though he preferred the title of “pioneer”) and how he spent more years at sea than on land, traveling the world. In the gaps of his stories, he dwelled on the decline he saw in Australia, his “true home” as he called it, and how Cairns had changed radically from when he was a pineapple farmer back in the 1950s. Though all his stories were unique and special in their own character, there was one common thread he held onto—the way humans were an undoubted plague on the Earth.

Perhaps he was a bit cynical—he did, after all, shake his head when I told him I sought to work in the Foreign Service, maybe even for the United Nations (which he called the “Divided Nations”)—but for all of his criticisms, there was always a sliver of truth to them. We agreed that humans would never come to terms with balancing power, that greed was as deadly as any disease, and that cooperation was the key to solving our major problems. We spoke about the uprisings around the world, from Australia to Chile to Hong Kong, and how the people were fighting back against systemic abuses. As our conversation dwindled to a close, he was worried that despite everything he has seen and lived through, the worst was yet to come.

“The worst” for him meant tyranny and dictatorships becoming mainstream in the following decades. He feared that peacekeeping institutions might not be enough to curtail the growth of autocratic leaders and populist movements, and that the world would be thrust into a dystopian and dictatorial future where access to clean water and air dictated the hierarchy of society.

It was a bleak end to my seaside conversation, but a conclusion I took with me even to the depths of the world’s largest reef. The brilliance of color I expected was gone; the corals and clams seemed to wither beneath the ocean’s currents, and few bursts of color appeared as fish swam in and out of their homes. It seemed to be a metaphor for what was waiting for us on land: the loss of color, the loss of life—patterns that were already evident from the bush fires raging just miles inland.

I wondered what, if anything, we could do to save our planet and help our people. My goal in studying abroad in Australia was to investigate environmental politics and their relation to refugee crises, but I have ended up disappointed in finding more questions than answers. The politics here, like back in the United States, prioritize capital gain from coal exports while sidelining causes of low or soft politics like the environment and migration. Australia, as one of the world’s richest countries in natural beauty, is being led by those who don’t value it. Perhaps it’s time for a change in leadership, a widespread Scomophobia within Parliament that would turn the tides of Australia’s domestic politics and usher a new, desperately needed era of pro-environmentalism in order to preserve the country’s treasures.