Positive Branding and Soft Power: The Promotion of Sufism in the War on Terror

Since the beginning of the global war on terror, Saudi-inspired Wahhabism has been scrutinized worldwide for being synonymous with “hatred” and “intolerance.” Conversely, Sufism has come to be seen as a gentle, “moderate” alternative and a tool of counterterrorism policies in many Muslim-majority countries—and beyond. Indeed, it has also been brought to the fore in U.S. policymaking circles as an ideological bulwark against extremism. As a popular instrument of “religious soft power” and a “positive branding of Islam,” Sufism has been used by state and non-state actors “to influence what others do through attraction and persuasion” rather than coercion. These intricate top-down and bottom-up processes are interwoven in diplomatic and transnational practices and have implications at various levels—from the local to the global.

This evocative signifier of Sufism has been filled with idealized content (love, peace, tolerance, moderation) and has inspired an influential narrative—namely that there exists another, wholly different Islam and that the intrinsic virtues of this mystical and mostly quietist trend can offer a suitable alternative to the most radical expressions of Muslim politics. Sufism has repeatedly been presented as the true Islam that needs to be embraced to counter, delegitimize, and defeat terrorism. Sufism and radical Islamism have thus been constructed as two mutually exclusive concepts, perceived as two rival entities fighting each other for the soul of Islam.

However, a quick historical view of the politicization of Sufis and the ways they have been perceived by Western nations shows how this sort of idealization can be misleading. There was a time when the “Islamic peril” was not identified with Salafi jihadis such as Osama bin Laden or ISIS leader Abu Umar al-Baghdadi, but rather with the leaders of Sufi orders who spearheaded the resistance to European powers. In the colonial era, Sufism clearly resonated as a threat. From Algeria to India, Sufi orders leading jihads against colonial powers were sources of paranoia for European administrators.

Today, however, Sufism has become the embodiment of positive religious values the world needs to promote in order to defeat terrorism. As Jonathan Granoff, former member of the United Nation’s NGO Committee on Disarmament, Peace & Security said at the 2016 World Sufi Forum (inaugurated, interestingly, by Indian Prime Minister Narendra Modi): “The entire world, East and West, needs to rethink and reform its existing strategy on countering jihadist terror. Sufism is an inspiring antidote which awakens the human capacity for love, service, compassion and peace.” At a time when Hindu nationalism, betraying strong anti-Muslim tendencies, is in power, Sufism is thought of as a potential tool of India’s religious soft power. Elements of Sufism have also been included in the domestic and foreign policies of various states such as Pakistan, Indonesia, North African governments, and even the Gulf states (apart from Saudi Arabia).

As a tool of soft power, Sufism has been used to craft an officially palatable version of Islam. These religious policies coincided with (or provided resources for) active efforts on the part of U.S. policymakers to construct a moderate Islam. For instance, in Pakistan, a frontline state in the war on terror, Sufism was held up, or even reified, as an Islam of peace and love. It was presented as an integral part of President and General Pervez Musharraf’s “enlightened moderation” and of Pakistan’s softer side. The main objective of this new paradigm was to promote—mostly to Westerners—a tolerant, open, and progressive image of Pakistan at a time when global anxiety about Islamic extremism was at its peak.

While Sufism has been instrumentalized domestically and internationally by different governments for various political purposes, Sufi actors themselves have also been active in seizing these windows of opportunity to pursue their own interests as well as “their own ‘foreign policies’” through which they attempt to influence the official foreign policies of their countries. These public policies of strategically mobilizing “moderate Islam” have indeed had important domestic implications in some countries. In the Sahel region of Africa, for example, it has exacerbated disputes between contending religious groups. In Pakistan, actors who have been identified by the state as moderate Sufis—such as the Barelwis, a movement founded in the 19th century in response to conservative reformers such as the Deobandis—mobilized after the government’s call from 2009 onwards to save the soul of Pakistan from creeping “Talibanization.”

After being marginalized for decades, these Barelwi groups sided with those in power in search of material, symbolic, and political resources. Barelwi actors emphasized publicly their identity as “good” Sufi Muslims, in contrast to the Salafi or Wahhabi trend which was increasingly becoming synonymous with the “bad” Islam to be combated worldwide. They strongly reinforced the anti-Wahhabi narrative. They also gave more credit to the theological, rather than the political, “root causes” of radicalization or terrorism—namely that specific modes of interpreting Islam are the main causes behind extremism. Various conferences aiming both at denouncing Talibanization and reasserting the role of Sufis in the promotion of a peaceful, tolerant Islam were organized. A delegation of Barelwi leaders was even welcomed in Washington in April 2010; the group met representatives of the State Department, Depart of Defense, Congress, USAID, think tanks, and NGOs.

The Barelwi figure Tahir-ul Qadri, who heads Minhaj-ul Quran, a transnational organization with a large international following, published a widely publicized fatwa against terrorism and suicide attacks in English. Critical of the doctrines and actions of Wahhabis, Qadri has taken into account the way the latter have shaped Western opinion on Islam for the worse and thus tried to influence the highly-charged, ongoing debate about Islamic violence. Similarly, in Indonesia, an “International Summit of Moderate Islamic Leaders” was held in Jakarta in May 2016. It was sponsored by the Nahdlatul Ulama (NU), the Indonesian analog to the Barelwi movement.

While nice in theory and certainly appealing to Western actors, the idealization of the category of Sufism in public policy might have serious counterproductive effects as far as curbing violence is concerned. In fact, Sufi-influenced initiatives may have contributed to the very radicalization processes they were meant to counter. In some cases, they have reinforced and intensified sectarian divisions. During the 1980s, General Zia-ul Haq launched a top-down Islamization process in Pakistan, favoring ultraconservative Deobandi Islam at the expense of Barelwi and Shiite influences. The latest official endeavors to promote a “state Sufism” might just have a similar effect, further solidifying the sectarian divide that became normalized under General Zia. Numerous Sufi leaders and shrines became the targets of increased violence from 2005 onwards, after they were identified as effective bulwarks against terrorism. The U.S. embassy, for its part, funded the renovation of some of the main Sufi shrines in South Punjab and the Musharaf regime, allied to the United States, publicly celebrated these communal places of devotion, in the process tainting these shrines during a time of intense anti-Americanism.

Debates between Sufis and anti-Sufis are far from new in South Asia. What is new, however, is the targeting of Sufi places of worship, and this cannot be explained solely by rising Deobandi or even Salafi influence—which already existed throughout the 1980s, well before the violence became more common. When the state, particularly an authoritarian state, tries to co-opt a given Islamic movement for controversial political ends, it can leave the movement vulnerable. In this context, we can inquire whether the aggressive promotion of Sufism in the framework of the U.S. war against terrorism and its potential perception as a neo-imperialist tool by jihadist actors explain in part why it was only after 9/11 that the shrines were actually attacked and Sufis killed by radical militants. Similar questions arise elsewhere in the Muslim world: “What happens when Sufis come to stand in for an American proxy, when the Americans themselves are so out of reach? This is a question we must also ask of Mali, when among the first objects to be attacked in Timbuktu on its occupation by Ansar al-Din in 2012 were those sites that were both Sufi and classified as UNESCO World Heritage sites, a message that clearly had more than one intended recipient.…Might the internationalization of these sites within inter-government projects explain why it was only now that they were destroyed?”

Finally, the state’s empowerment and legitimization of Sufi actors in a heightened sectarian environment may have contributed to the radicalization of some of the very Sufi actors enlisted in the fight against radicalization. Indeed, the perception of Barelwis as “moderate” has always been misleading and simplistic. For instance, the Barelwi group Tehreek-e Labaik Pakistan (TLP) has made headlines of late as a hardline Islamist organization. It gained popularity thanks to its uncompromising stance on blasphemy and its sanctification of the murderer of the Governor of Punjab Salman Taseer, after the latter was accused of blasphemy. The TLP became the fifth-largest vote-getter in the 2018 general elections. The party successfully mobilized supporters based primarily around its agenda protecting the Prophet’s honor and the finality of his prophethood—and of punishing blasphemers by death. The recent acquittal by the Supreme Court of Asia Bibi, a Christian woman accused of blasphemy in 2009 and imprisoned ever since, led in November 2018 to the TLP bringing the country to a standstill through massive nationwide demonstrations. The party insulted the army, threatened to kill the judges, and called for Bibi to be hanged. Despite Prime Minister Imran Khan’s speech to the nation displaying firmness towards the agitators, the government promised the TLP not to let Bibi leave the country. This politics of appeasement towards the new threat of the Sufi Islamists does not bode well for Pakistan.

Editor's Note: These articles were written as part of the Geopolitics of Religious Soft Power project, a partnership between Georgetown University’s Berkley Center for Religion, Peace, and World Affairs and the Brookings Institution supported by the Carnegie Corporation of New York. The statements made and views expressed are solely the responsibility of the respective authors. This piece was originally published on the Brookings Order from Chaos blog. 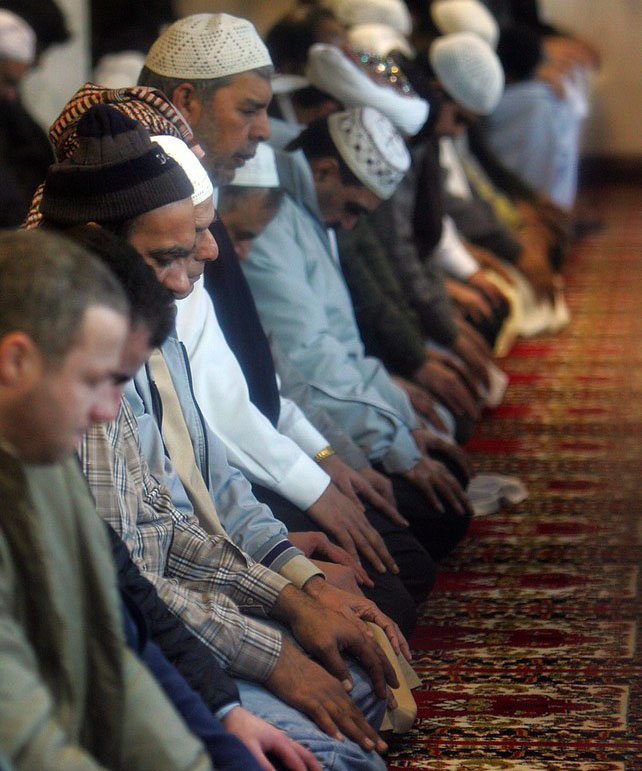